D.B. Cooper jumped out of the plane he hijacked by opening up the stairs. Don Draper also once left a plane by walking down the stairs!

With the end of Mad Men coming up on May 17th, everyone is obsessing over what will happen to Don Draper & Co. before the screen goes black.

With that, the conspiracy theories of past are being dug back up and revisited, and last night creator Matthew Weiner told Conan the strangest theory he's heard is that "people think that Don is going to become D.B. People think it's going to end in a plane crash, which Lionsgate would never pay for." He's not totally shooting the theory down though—he also added, "I’m not going to dismiss it, because I want people to watch the show."

D.B. Cooper (a name given to the unidentified man) hijacked a Boeing 727 in 1971, extorted $200,000 in ransom while doing so, then parachuted from the plane mid-flight, never to be seen again. His case remains the only unsolved air piracy case in American aviation history. But Weiner has stated before, in no uncertain terms: "I'm never going to rewrite history." Though one could argue it's not rewriting history if no one ever knew what happened to D.B. Cooper—or who he really was. 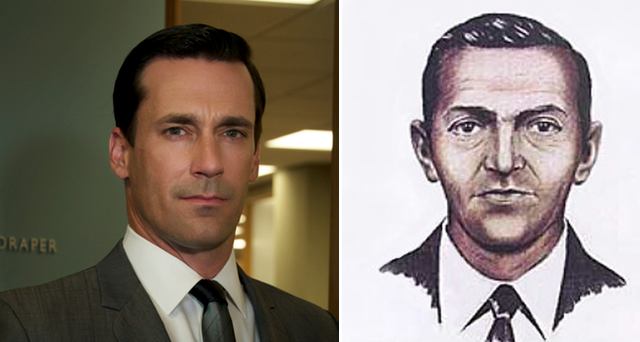 Don Draper and D.B. Cooper. Both men. Both wearing ties!

So what will happen as the series closes out? The final two episodes are called "The Milk and Honey Route," and "Person to Person," and those are the only clues we really have. Our in-house expert Ben Yakas says, "I think it IS possible that Don may drive off and start a new life (I feel like the show is going to come down on whether or not Don has made any significant changes in his life, based on that decision—if he really has embraced his past, he really has reconciled his two identities, he wouldn't just run away again, etc). However, he is NOT D.B. Cooper."