Matthew Weiner: "It's Mad Men And Something Horrible Always Happens"

Following the mid-season finale of Mad Men, Matthew Weiner was tossed into a press pool where he answered a lot of the same questions for various outlets... but without really telling us anything at all. Classic Weiner. Below, he discusses Don's many relationships, Ginsberg's schizophrenia, and the series finale... which he's been writing this week.

On Bert Cooper's death, and dance (via The LA Times): "I came into the season with the idea that Cooper would die, he’s of an advanced age. He would die during the moon landing and it would send the power dynamic at the agency into a tailspin, and Don would see his ghost singing that particular song. I’d heard it on the radio as a kid, it’s a Depression-era song and it offered a chance for Cooper to break out of his character and remind Don there’s more to life than business." 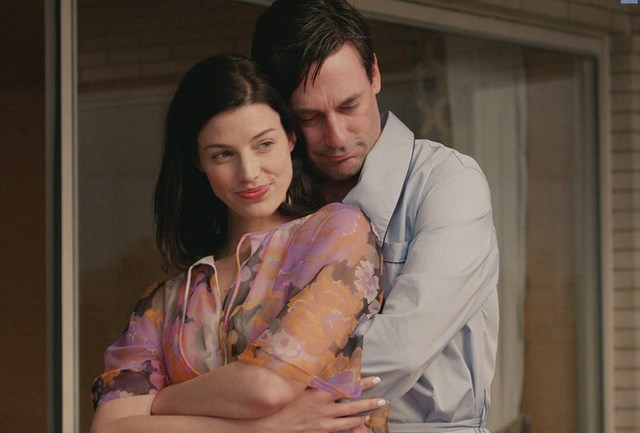 On Megan and Don (via TV Guide): "These people love each other, they're married, their relationship has changed obviously. From the moment she left advertising and decided to become an actor, Don has had trouble with her being separate. I love the idea that they're both fighting to keep it together in the most delusional way throughout the season. It was a very short scene that to me was harvesting the reality. These things are irreparable on some level, but hopefully the way that it moves was realistic. We all felt it was."

On Peggy and Don (via Variety): "The most emotional thing in the whole season to me was seeing Peggy and Don working together again finally and when they said 'We got it.' When you see their mentor relationship come back to life. And then later when the partners meeting is over and Don tells Peggy 'I’m going back to work.' He knows that she got Burger Chef all by herself. It’s exciting to push somebody on a bike and then let go." 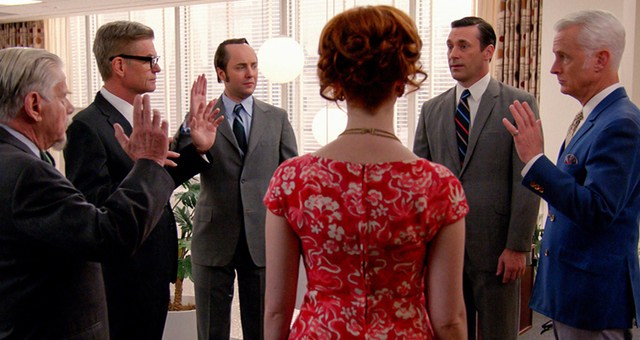 On Joan and Don (via Vulture): "Are you friends with the person who lost your lottery ticket for $1 million? It was a big deal in season six. She was there when they put him on leave, and she was quite firm about it. Don's alcoholic disregard for her well-being—it was $1 million to go public, she slept with that guy so it would happen, and Don just impulsively merged the agencies, fired that guy, and cost her $1 million in 1968 money. If people can see it that way and wonder why Joan doesn't want that guy in the firm, maybe it will help."

On where we've left Don (via THR): "Don behaved with—I wouldn't call it maturity—integrity on a pretty large scale. That's where we wanted to leave him—and of course a little bit of bittersweetness that life is more important than success."

On Ginsberg (via THR): "He's a delusional schizophrenic. That's not a disease that's a cause and effect disease. I don't know how much we know about it, but there are triggers, and anyone who has been paying attention to the story can see that he's been wrestling with that. It also does appear sometimes in people who express creative abilities. His delusion is a disease, and it gets tied up into everything that is outside him."

On horrible stuff happening (via Vulture): "A lot of the tension [of the season] comes from watching Don trying to work his way up in his own business, and you don't believe it's going to work out, because it's Mad Men and something horrible always happens. I wanted to take advantage of that."

On the finale (via Deadline): “You’ll have to see how we bring it all together. We don’t want to punch [the fans] in the face. We want them to walk away changed or better or at least entertained by it. That’s all I can say.I’m writing the finale today as I was yesterday and it’s set in stone.” (To THR): "I'm in the office today finishing the series finale. I start directing episode 13, the second to last, next week. It's pretty heavy stuff." (And to TV Guide): "The second half of the season is a continuation of what you saw. What's happened in the show is going to be taken into consideration as we move forward. We tell the story on a very human scale—there's no explosions or gunplay. The only ammunition we have is the mystery of what we're going to pay attention to. There are going to be stories in there that people probably think are frivolous that I've always wanted to tell."