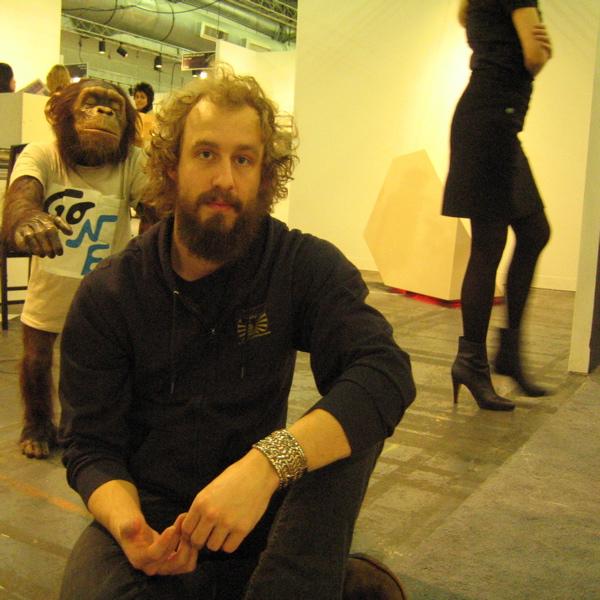 Matthew Houck is the man behind Phosphorescent -- and the Brooklyn-by-way-of-Athens, Georgia musician just put out his third release, Pride, to many eager ears and much fanfare. Playing every instrument on the atmospherock avant-pop album, he also recruited some friends to help along the way, such as the Dirty Projectors’ Dave Longstreth. On the periphery you can hear Bob Dylan, Neil Young and Will Oldham -- but the modern day folkie has a sound all his own, and lucky us, he's playing two shows in New York this week. Catch him this Friday at Silent Barn and Saturday at Cake Shop.

Listen: A Picture of Our Torn Up Praise.mp3

First thing's first, where did your band name originate?
First things first. We're hung over right now in a cafe in chilly Baltimore afternoon. At this minute there is a crazy-ish man talking very loudly and non-stop to everybody. Every thought that pops in his head: "It tastes good, chocolate cake. I'm in a good mood today. You're a very beautiful woman. You're like a moon-star. That is a pink sweater. Untouchables. That's a good movie. I love that. Untouchables"

Currently there are four of us in Phosphorescent. We've been on the road for about a month. We were kicked out of the Washington DC club last night for drunken-ness and rowdy but gentle mayhem. The show was great though. Every show on this tour has been like that. We are the best band in America right now. We can prove it.

You moved from Georgia to Brooklyn, has that move been a good one so far? What differences have you noticed in the music scene/community?
I lived in Athens, Georgia. I've been in Brooklyn for about a year now. Living out in Bed-Stuy. I love it here.

Do you think the move will seep into your music?
Yes! Everything always does.

You recently got a great review on Pitchfork, is this a website you follow? Do you think the review will effect you at all?
Sure I am aware of Pitchfork and I am aware of their influence. The review won't effect me personally or artistically but I am glad of anything that brings more attention to the new album, Pride. It's a great record. It's easily the best record released this year and probably of the last ten years. I haven't heard anything that comes close.

Given the opportunity, how would you change New York?
Let's take back Manhattan.

Under what circumstance have you thought about leaving New York?
I recently spent some time surfing and hanging out in Los Angeles. For the first time I saw some of the greatness of that city. I'm thinking about it.

Can you please recommend a good weekend hang-out that isn't unbearably mobbed?
Sadly, no.

What's your current soundtrack to the city?
Haven't been there in a month! The soundtrack out here on the road though has been mainly an old Bobby Charles album and R. Kelly's new album. Both are seriously good.

What's the best subway line?
The A line. All the way from Northwest Manhattan to Rockaway Beach. That's a lot of ground and cultures you're covering there. Or hell you know what I like all of them. Racing around anywhere in this huge city in trains that run in tunnels under everything? Give me a break that whole system is amazing.

Best venue to play/see music.
So far I'm most partial to the Bowery Ballroom. But when we're there this weekend it'll be the Silent Barn and Cake Shop. I'm not kidding.