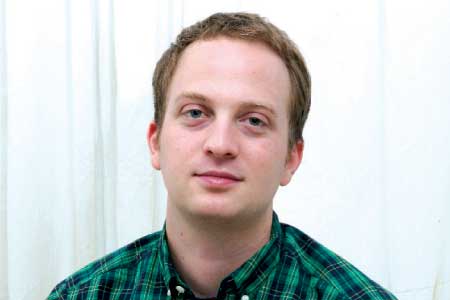 New York filmmaker Matt Wolf has created a feature-length documentary about the late Arthur Russell, a musician who mastered everything from the cello to the perfect disco beat in unimaginable ways. Wolf's film, Wild Combinations, opens at the IFC Center on September 26th, and even if you aren't familiar with Russell or his work you'll get a beautiful, intimate look at the musician that will leave you craving more (watch the trailer here).

How did you become interested in Arthur Russell? A friend of mine told me about a gay disco auteur from Oskaloosa, Iowa, who would ride the Staten Island Ferry, obsessively listening to mixes of his own cassettes in the 1980s. That image alone really interested me, but when I heard Arthur’s music I became obsessively involved. Arthur really embodied many of the cultural moments that have always intrigued me—underground disco, the downtown avant-garde of the 1970s and 80s, and the experience of being queer in New York at that time.

How did you approach making the documentary? I come from an experimental filmmaking background, so I was cautious about some of the traps of the conventional music documentary. I chose to really limit the amount of characters I included in the film. Instead I focused a great deal on Arthur’s former boyfriend Tom Lee and his parents Chuck and Emily Russell in Oskaloosa. I also needed to create a compelling visual language to bring Arthur to life since there is so little archival footage of him. I used an actor, Arthur’s actual clothes, and outmoded VHS and Super8 formats to shoot evocative recreations—on the Staten Island Ferry, in cornfields, and more. The result, I hope, is an intimate and personal portrait of Arthur rather than a definitive biography.

How long did it take from beginning to end? The whole filmmaking process took 2 years. And I’ve been traveling quite a bit with the film for the past year… “on tour” for Arthur you might say.

Are there any parts of his life that you weren't able to touch upon in the film? Do you have any unanswered questions? I think aspects of Arthur’s disco output are somewhat lightly represented. So many key players from that world have passed away and also very little footage or archival material exists to bring this very specific moment to life. But I think the only fundamental absence in the film is Arthur. He was never extensively recorded or interviewed on camera, so the film in a sense is an inexact reconstruction. I think never meeting or knowing Arthur personally will always be the one unanswered question I have.

What did you learn about Russell during the making of the film that you hadn't previously known? I didn’t go into the film with extensive or encyclopedic knowledge about Arthur’s biography or musical trajectory—the filmmaking process was a sustained form of research for me. In a sense, I was trying to always be in a position of not knowing, so that I could freshly respond to the anecdotes and information recounted by Arthur’s closest collaborators, friends, and family. I think I cling to the most mundane or personal details I learned about Arthur—for instance, that The Muppet Show was his favorite television program. Or that he admired the production value of Fleetwood Mac or Abba…“transcendent pop” he would call it.

What do you think of the more current bands who seem to be very influenced by his music? I think there’s a great deal of Arthur’s influence in contemporary music, particularly the resurgence of disco that’s so great in bands like Hercules and Love Affair. I think Arthur was insisting on blurring genres and defying the established musical sensibility. If anything, that’s a more commendable and acceptable pursuit these days. It only seems natural that many other musicians and artists would be indirectly inspired by that forward-thinking impulse.

In the film we see, towards the end, all of Russell's music, much of which never got released--what is being done with all of the archives? Audika Records is still scouring Arthur’s archives, preserving the strongest takes and best recordings from his immense archive of songs. The biggest news is that a new album of totally unreleased material (much of which is featured in the film) is coming out in October. The album “Love Is Overtaking Me” features a great deal of Arthur’s cowboy and folk songs—yet another genre of music you might not be expecting from Arthur.

Where did the title of the film come from? The film’s title is taken from Arthur’s song “That’s Us / Wild Combination.” I thought Wild Combination was an appropriate metaphor to describe Arthur’s music, particularly his diverse interests in disco and avant-garde composing. I think Arthur was tremendously talented at putting seemingly unrelated sounds, genres, and ideas together and successfully synthesizing them.

What do you think of the New York music scene now, as compared to back then? I think New York is more of a hub these days then a laboratory and breeding ground for experimentation. Musicians and artists seem to pass through to perform and to hang out briefly, but they work and go into hibernation elsewhere. That’s probably because New York has become such an economically straining and competitive environment. It’s hard to be free to experiment and play in this city.

What is your next project? Still in that blurry brainstorming stage, so no answers to that question yet!

Please share your strangest "only in New York" story. Meeting David Mancuso—known by many as the founder of disco, who created the first underground party called The Loft—in a park in the East Village was an “only in New York” moment. David was like the mayor, and children, senior citizens, adults, and teenagers all knew him and waved to say hello. We hung out in Tompkins Square Park talking about the old days.

Which New Yorker do you most admire? The New Yorker I most admire is the deceased artist and writer David Wojnarowicz—he made politically aggressive, AIDS activist artwork and wrote the legendary, uncompromising Close to the Knives. David’s series Arthur Rimbaud in New York is my favorite work of art: he posed in dilapidated and mythological sites around New York with a black and white photocopied mask of the French symbolist poet Arthur Rimbaud.

Do you know the scoop? Send us a Tip