The Irishman, the eagerly-anticipated film about the killing of Jimmy Hoffa that is also marks the ninth collaboration between director Martin Scorsese and Robert De Niro, will open the New York Film Festival on September 27th.

"The Irishman is so many things: rich, funny, troubling, entertaining and, like all great movies, absolutely singular," said New York Film Festival Director and Selection Committee Chair Kent Jones. "It’s the work of masters, made with a command of the art of cinema that I’ve seen very rarely in my lifetime, and it plays out at a level of subtlety and human intimacy that truly stunned me. All I can say is that the minute it was over my immediate reaction was that I wanted to watch it all over again."

Here's how Film at Lincoln Center (the organization behind the NYFF) describes the plot:

is a richly textured epic of American crime, a dense, complex story told with astonishing fluidity. Based on Charles Brandt’s nonfiction book I Heard You Paint Houses, it is a film about friendship and loyalty between men who commit unspeakable acts and turn on a dime against each other, and the possibility of redemption in a world where it seems as distant as the moon. The roster of talent behind and in front of the camera is astonishing, and at the core of The Irishman are four great artists collectively hitting a new peak: Joe Pesci as Pennsylvania mob boss Russell Bufalino, Al Pacino as Teamsters president Jimmy Hoffa, and Robert De Niro as their right-hand man, Frank Sheeran, each working in the closest harmony imaginable with the film’s incomparable creator, Martin Scorsese.

Scorsese also expressed his excitement in a statement, "It’s an incredible honor that The Irishman has been selected as the Opening Night of the New York Film Festival. I greatly admire the bold and visionary selections that the festival presents to audiences year after year. The festival is critical to bringing awareness to cinema from around the world. I am grateful to have the opportunity to premiere my new picture in New York alongside my wonderful cast and crew." 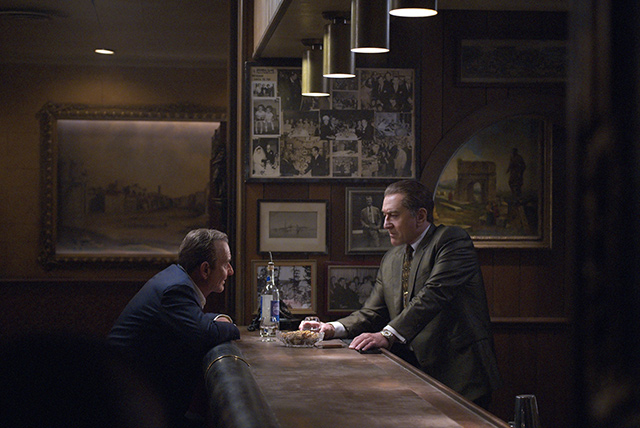 A still from "The Irishman" (Niko Tavernise / Netflix)

The Irishman was shot in New York in 2017 and 2018. Netflix then bought the rights to the film. Scorsese remarked at the Marrakech Film Festival late last year about the fortuitousness of the pairing: "People such as Netflix are taking risks. The Irishman is a risky film. No one else wanted to fund the pic for five to seven years. And of course we’re all getting older. Netflix took the risk." (Paramount originally bought the rights to the book for Scorsese and De Niro in 2008.)

This will be the world premiere of the film, which will be released in select theaters and on Netflix. The streaming giant's move into prestige filmmaking ruffled Steven Spielberg's feathers last year, with Spielberg saying, "Once you commit to a television format, you’re a TV movie. You certainly, if it’s a good show, deserve an Emmy, but not an Oscar. I don’t believe films that are just given token qualifications in a couple of theaters for less than a week should qualify for the Academy Award nomination."

Tickets for the 57th New York Film Festival go on sale to the general public on September 8th. Festival and VIP passes are on sale now. The festival brings together the best of world cinema to New York; last year, The Favourite opened the festival, and other films shown included Burning, Cold War, If Beale Street Could Talk, Shoplifters, and Roma.