Last month Mark McGrath announced that he would be taking the captain's chair on a '90s nostalgia cruise destined for the Bahamas. First mates were to include his band Sugar Ray, Smash Mouth, Gin Blossoms, Cracker, Spin Doctors, Vertical Horizon, The Verve Pipe, Marcy Playground, Live's Ed Kowalcyzk, and Collective Soul's Ed Roland. But now the October event of a lifetime has been cancelled.

With no explanation for the cancellation offered on the cruise's website, the public has been left to come up with reasons on their own... but the well is dry! Is it possible that there just weren't enough people interested in being on a boat for days with Smash Mouth? Could additions to the lineup have helped? Why wasn't Everclear's Art Alexakis brought on as counsel? 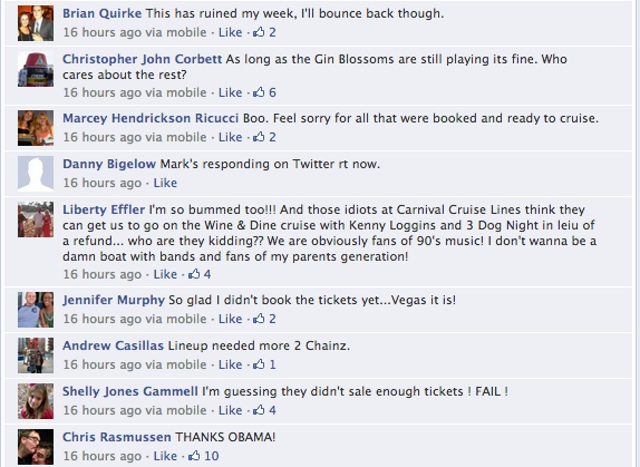 Alas, there are more questions than answers. Like, what ever happened to Crazy Town? And could they have helped?

Eventually, McGrath did Tweet one "explanation," laying all the blame on the infamous Poop Cruise of February 2013:

@fuckthefalcons my apologies, I'm really bummed as well...that poop cruise did us no favors

For the sake of the cause, we're going to offer one suggestion: let's combine the McGrath & Friends Cruise with the Titanic II's maiden voyage. And just, like, see what happens with that.

#90s
#cruise
#fail
#Mark McGrath
#nostalgia rock
Do you know the scoop? Comment below or Send us a Tip
A new Gothamist is coming! We’ve moved comments over to our beta site. Click here to join the conversation and get a preview of our new website.