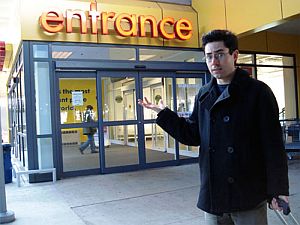 In June of 2007, Mark Malkoff made news with his attempt, documented in a funny video, to patronize each of Manhattan’s 171 Starbucks in a single day. Now the Comedy Central staffer is back in the press with his latest quirky idea; he spent last week living in the Paramus, New Jersey IKEA to avoid his fumigated apartment. The strange experiment has been humorously documented on his website; we got him on the phone in IKEA before his stay ended Saturday night.

What are you doing right now? I was just in my living room hanging with a friend who came to visit me. Now I’m escorting her to the escalators; I’d walk out with her but I’m not leaving here for a week.

Have a lot of buddies come to visit? Yeah, a lot of friends and a lot of people who just heard about me and come bringing food items and living supplies. They’re concerned with my well-being. People brought me Starbucks because I did that other video and I guess they thought that was funny.

But aren’t you entitled to eat for free at IKEA? I am; I can eat whatever I want of the Swedish food they serve here. I’ve been vegetarian since I was a kid so they’re working on the first ever IKEA tofu meatball. I’m getting kind of tired of Swedish food and I may order Chinese or Dominos later today. I’ll have to give them the address of 100 IKEA Drive and hope they can find me in the bedroom set.

How have you been adapting to residing in a store and not going outside for a week? I had my personal trainer come in and we worked out all over the store so I could try and live a normal life. I played Lazer Tag with security guards at two in the morning. The fluorescent lighting is on 20 hours a day which is getting to me because I don’t have any sunlight. I wake up from naps and there are people staring at me and I feel like an animal in a zoo.

But I brought it on myself. The apartment I’ve set up is so much nicer than my own apartment; the only thing is none of the stuff works. The first night I got sick around 4:30am and I had to vomit. I had about 10 seconds to decide where I was going to go. I ran to the toilet and remembered, "Wait, this is a fake toilet!" So I ran to the kitchen and vomited in the sink, then I remembered the kitchen sink is fake as well. I went away for an hour and when I came back the puke was cleaned up. So whoever’s job that is in IKEA, I am really sorry.

Have the IKEA managers tried to curb any of your antics? No, I get full creative control, which is insane to me. I met with them in mid-December and they’re letting me do this weeks later. I own the content with no restrictions on anything. The only thing they said I couldn’t do is paint my bedroom walls; I wanted to paint them green yesterday. But everything else goes. I can do whatever I want. If I want a clean towel I just go down to the towel department and get a clean towel. There’s a price tag on it when I dry myself but whatever. Yeah, this place is very livable except for the fluorescent lighting coming on at 4:15. And there’s construction right by where I live with hammering and drilling at about 5am. I absolutely feel like I’m back in the city.

What’s the construction about? The workers are always constructing bedroom sets. I’m living in what looks like a functional living room, bedroom, spare bedroom and bathroom with two sinks. This would go for at least $4,000 in Manhattan. I have a fake door but the living sets are all around me and they’re constantly working on them in the wee hours.

Do you think your experience is in any way a comment on the pervasiveness of American consumer culture?
I’m a comedian and filmmaker and I just needed a place to live for a week. So I thought two things: If I can move in here I’ll have a place to stay and I can make videos.

How do you respond to people who think this is just some viral marketing thing? IKEA is not paying me anything. I have my friends working for free, including WGA workers who are not working but who wanted to participate in something fun here. I just thought it would be funny to live in the store. If you look at the videos, I don’t think IKEA looks good all the time. In the first episode there’s a joke about my IKEA furniture falling apart. They let me close the store every night over the P.A. and I say things like, “Get out! I want to go to sleep! This is the King of IKEA, the god of Swedish furniture!” Last night at closing I did Bon Jovi covers and addressed a man over the P.A. saying, “You, the man in the brown suit and the obvious toupee, William Shatner wants his rug back.”

So I’m saying these uncensored things and IKEA is obviously not paying me to do these things. I just thought it would be good video content. We have no budget and I think it’s remarkable we’re able to make well-produced, funny content with a turnover rate less than 24 hours.

What are some of the news outlets who have visited you? I’ve had everyone from Germany to Sweden to Israel; the AP and Reuters were here and that’s how we got worldwide coverage. But I’ve had every country you can imagine email me for a radio interview and I’ve been doing about 10 a day because that’s all I can manage. People are inviting me to other IKEAs to sleep. I don’t know if they’re official or not but I politely declined.

You don’t see yourself moving on to life in other department stores? I don’t. I’m sure Target’s going to call next week and offer me this but I don’t want to live in a Target. I just wanted to make funny videos and I didn’t realize how much stinking fun this would be.

You seem to have a knack for getting a lot of press with oddball ideas. Where do you see all this headed? I’ve been doing comedy videos since I was a kid. I do these comedy videos all the time; it’s just that the two I did involving corporate entities are the ones that got me the press. But most of the stuff I do does not involve corporations. I pick premises I think are funny and just do them.

What does your wife think of this?
Christine thinks it’s funny but she doesn’t want to sleep over in a store. I’m not sure why. But she came to visit me and we had a date in the store Wednesday when the store closed and that was fun. Our apartment’s actually fine now; I got a call we could move back in on Wednesday night but I’m having too good of a time here. I have to leave Saturday at midnight because in Paramus no stores are open on Sundays.

#But I
#chinese
#comedy
#comedy central
#ikea
#In June
#interview
#living in IKEA
#manhattan
#mark malkoff
#new jersey
#Now I
#people
#So I
#starbucks
Do you know the scoop? Send us a Tip