[UPDATE BELOW] A Brooklyn woman scheduled to run in the NYC Marathon is gathering a group of runners to volunteer on hurricane-battered Staten Island Sunday instead of running the race. Penny Krakoff, a social worker who lives in Crown Heights, is entered in the race, but tells us she can't participate in good conscience. Instead, she plans to user her bib to take the official bus transporting marathon runners to the starting line on Staten Island—and then spurn the race to spend the day volunteering.

Krakoff says she'll collect extra food and and clothing to take with her on the bus and distribute it on Staten Island. Her neighborhood was spared the brunt of Hurricane Sandy's wrath, but Krakoff is well aware of the devastation wrought on Staten Island and elsewhere, and she's part of a growing number of New Yorkers who feel the Marathon should be postponed. She writes:

I cannot start a 26.2 mile run in Staten Island—people are missing, stranded, in need of resources. Brooklyn and Queens have equal devastation. Parts of Manhattan are without electricity, water, major hospitals are closed. The Bronx too has its own challenges. Today I will volunteer at a city evacuation shelter. Sunday morning I will catch the marathon bus to Staten Island. Not planning to run. Plan to volunteer instead and gather resources (extra clothes, bottles of water, food from runners at the start). Let's not waste resources and attention on a foot race. Who is with me? 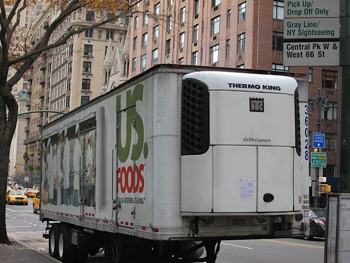 Generator for the marathon (Gothamist)

As of this morning, none of the other Marathon runners have joined Krakoff, but give it time—she only announced this last night at 11 p.m. The decision to go forward with the Marathon is quickly developing into a public relations nightmare for the Bloomberg administration, which has been generally praised for its initial handling of the hurricane preparations. Yesterday we reported that the Marathon was using generators and volunteers to organize the finish line in Central Park, and we wondered if this was an appropriate use of resources in a city so recently devastated by a natural disaster. Today that's the cover of the New York Post.

Krakoff is still exploring the best way to volunteer on Staten Island on Sunday, and she's reached out to Borough President James Molinaro. We'll update as more Staten Island volunteering details become available, but the Borough President's website has a list of needed supplies and where to donate them. Yesterday, Assemblywoman Nicole Malliotakis asked volunteers to bring donations of clothing, blankets, food, towels, water, and pet food to Rab's Country Lanes at 1600 Hylan Blvd. in Dongan Hills until 4 p.m.

Another Facebook group is organizing a boycott of the Marathon, and it will be interesting to see how many of those runners will join Krakoff or volunteer elsewhere.

Update 10:35 a.m.: Another group of Marathon runners has also been organizing independently of Krakoff's efforts. According to their Facebook page:

Runners will show up at the starting line, but will break off en masse at different points of the city to deliver supplies to places hardest hit and without power. This will mean departing from the race, to head to various buildings, running up and down stairs delivering water and canned goods, etc. Runners will show up to the marathon, as scheduled. Runners who want to help should post the words, “I’M HERE TO HELP!” somewhere on their bodies.

Never doubt the power of a small group of dedicated Marathon runners to change the world: The Marathon has been cancelled.

#frankenstorm
#hurricane sandy
#marathon
#nyc marathon
#sandy
#original
Do you know the scoop? Comment below or Send us a Tip