Large frostbitten crowds are expected to throng the Upper West Side on Thursday to watch dozens of giant balloons take over the city streets for the Macy's Thanksgiving Day Parade. (And today, they'll be watching them get inflated). But in addition to being bitter cold, it's possible that the balloons may not soar as high, if winds get super gusty. Did you know you can also watch the balloons indoors, on the tee-vee?

After incidents where wind-blown balloons have struck street lamps which then seriously injured parade watchers, the city instituted measures requiring balloons to be flown lower or removed if winds are above a certain speed. NYPD Chief of Patrol Rodney Harrison said on Tuesday, "Thirty-four mile per hour wind gusts is when we say, 'OK, we gotta bring it all the way down to the ground.' If we have to call an audible on the day of, and make an adjustment, we’ll do so." AMNY added, "Harrison said each balloon has its own guidelines for when and how high it can safely fly." There are an average of 90 handlers per large balloon, like Spongebob Squarepants and Pikachu.

For those brave souls, possibly with Viking blood, who decide to line the streets and watch the festivities, there are nearly 3,000 marching band members; the Muppets; 1,200 cheerleaders and dancers; John Legend; 1,000 clowns; 23 clowns on stilts; Ella Mai; the Rockettes; Martina McBride; floats galore; and SANTA CLAUS, to name a few. Sounds spectacular, but with the wind chill, it may feel like... 3 degrees. 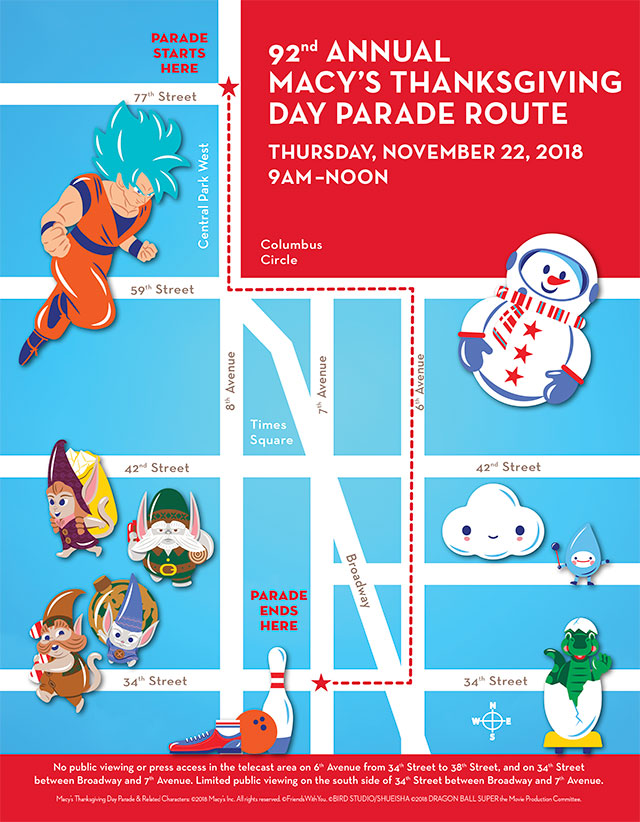 Macy's Thanksgiving Day Parade starts at 9 a.m., at Central Park West 77th Street and ends at 34th Street and 7th Avenue, outside of Macy's. Get there early and bundle up. Way up.

#macy's thanksgiving day parade
#thanksgiving
#windy thanksgiving
Do you know the scoop? Comment below or Send us a Tip
A new Gothamist is coming! We’ve moved comments over to our beta site. Click here to join the conversation and get a preview of our new website.