Thanksgiving Day may serve up the coldest weather in a century, so you might as well catch the balloons for Macy's Thanksgiving Day Parade on Wednesday afternoon and evening when it's a balmy 40 degrees. All the action takes place on the Upper West Side, starting at 1 p.m.

There are 16 giant character balloons, like Olaf from Frozen, Chase from Paw Patrol, and (Detective) Pikachu. There are also dozens of other novelty balloons, like Little Cloud and Macy's own Sunny the Snowpal.

Some fun facts: The tallest balloon is Diary of a Wimpy Kid at 62 feet; the longest balloon is the 77-foot Red Mighty Morphin Power Ranger; and the widest balloon is Jett by Super Wings, with a wingspan of 39 feet. There will be 1,350 handlers all together!

The balloons slowly take shape outside of the American Museum of Natural History starting at 1 p.m., but there's a special route: You enter West 73rd Street at Columbus Avenue and walk to Central Park West and head north to West 77th Street and walk around the museum on West 77th, Columbus and West 81st, finally exiting at West 81st and Central Park West. Here's a handy map if you want to try to navigate through the madness: 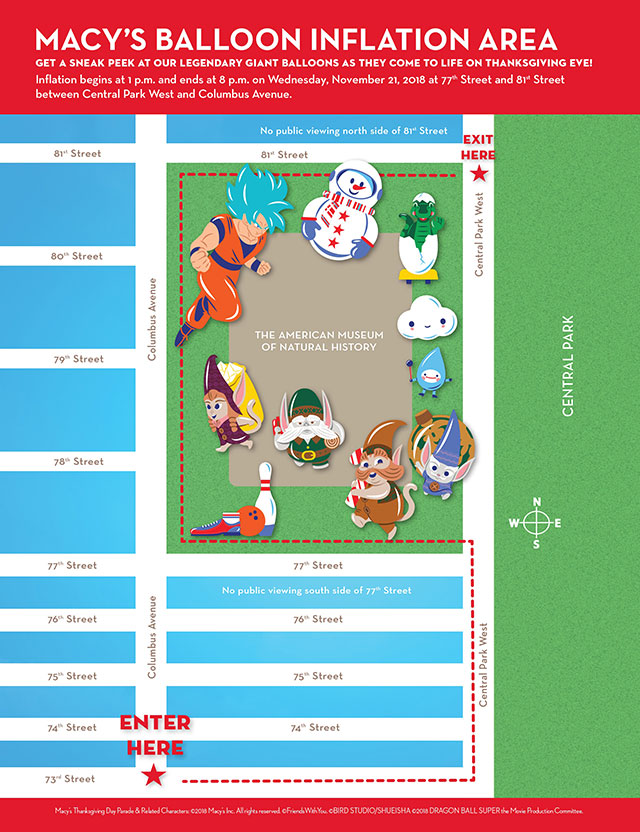