Map: Where Macy's 2012 Thanksgiving Parade Balloon Inflation Is Being Held

On Thursday, Macy's will hold its 86th Annual Thanksgiving Day Parade, and that means its 16 big character balloons, plus dozens of novelty balloons, will be inflated on the Upper West Side tomorrow, Wednesday, November 21st. As usual, the inflation occurs around the American Museum of Natural History. 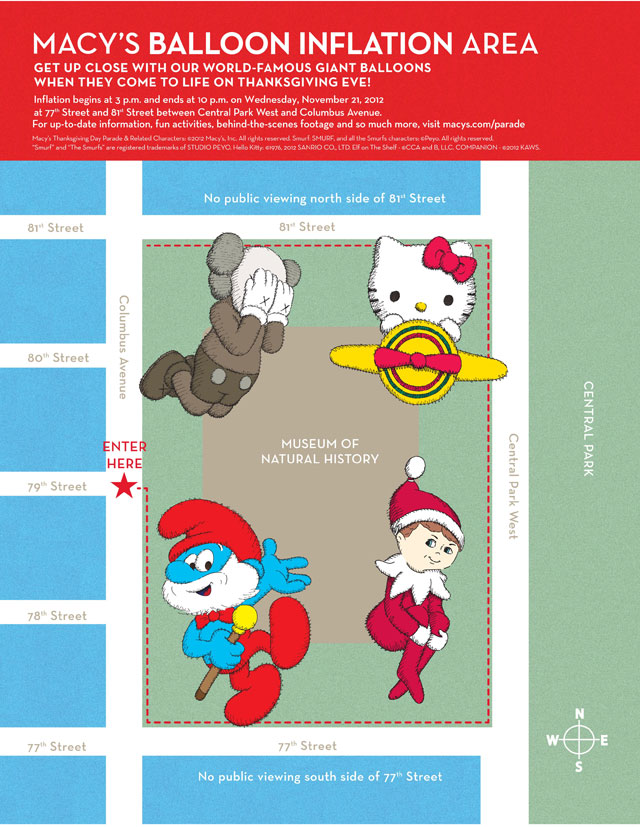 The balloon inflation starts at 3 p.m. on the Upper West Side, by the American Museum of Natural History. You enter at West 79th and Columbus Avenue and enter the viewing area which takes you south to West 77th, then east to Central Park West, and then up CPW to West 81st Street.

This year's balloons include Buzz Lightyear, Charlie Brown, Diary of a Wimpy Kid, The Elf On The Shelf, Paul Frank's Julius, Kermit the Frog, Ronald McDonald, Sonic the Hedgehog, Kung Fu Panda, Papa Smurf, Pikachu, the Pillsbury Doughboy, Sailor Mickey, Spider-Man, Spongebob Squarepants, and Hello Kitty, who has a new airplane balloon this year. Plus, graffiti artist KAWS has created a special balloon, "Companion" (on the upper left hand corner of the map) for the parade.