With illicit hoverboards threatening to take over our sidewalks, we would like to remind everyone that New York City is a walking city. One of the huge advantages we have over our metropolitan nemesis, Los Angeles, is that we all walk a lot here. Over there people take their cars to places that are just like two blocks away! Source:

This is from a chart showing how many steps I take each day. I landed in LA on the evening of the 28th. Point NYC. pic.twitter.com/6u1wwFaqm7

But our walking culture is being threatened by the rise of Uber, unsafe conditions for pedestrians, and the aforementioned futuristic self-propelling device. Or is it? Even if it's not, it doesn't mean we can't walk MORE. We can always walk more. In the same vein as taking the stairs instead of the elevator, why not take the sidewalk instead of the subway? Aside from sweet, precious time, what have you got to lose? Here's an infographic that will tell you just how many calories you can burn if you walk between subway stops. Did you also think that walking along the 4/5 from 14th Street to 42nd Street would mean burning way more than 121 calories? Yeah. Well, don't let those low numbers keep you from walking. Walking will keep you alive. Sit down AND DIE. 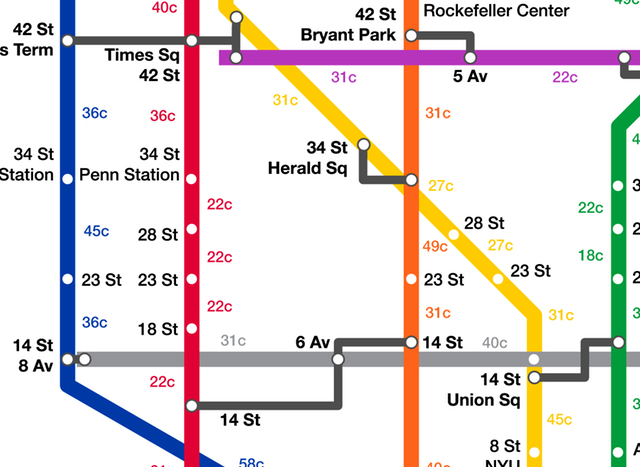 The designers of this thing explain that they've "included the distances between all main stations used by commuters within the central network" (full map). They've also calculated how many calories one can burn by not just walking, but jogging and cycling between stops.

#calories
#health
#infographic
#walking
Do you know the scoop? Comment below or Send us a Tip