We really love the story of the brown and white Hereford cow found wandering around Briarwood in Queens, so we're especially happy to learn that she headed upstate to the Farm Sanctuary. The AP reports that the cow has been renamed "Maxine" ("after artist Peter Max and his wife, Mary, who brought another animal to the shelter in 2002") and that she probably ran away from a live market, as there was a tag in her ear. 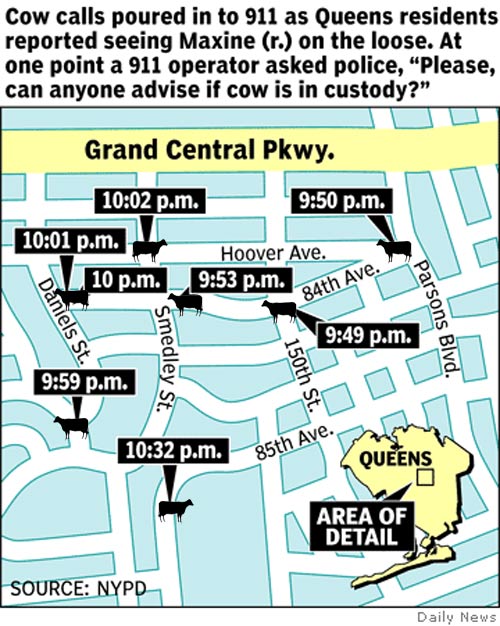 But the Daily News might love Maxine's story even more, because it created a great map of all the 911 calls about her whereabouts (we added the cow graphics for fun). Maxine mooves pretty fast, which is probably why Police Commissioner Ray Kelly couldn't resist saying during his Wednesday press conference, "We do have the cow. The cow is in custody." One reader commented on Tuesday, "this was in my neighbors back yard and i saw it first hand, i stared at that cow for an hour and 15 minutes, she did not moo loudly nor did she buck. it took two precincts to get her . they chased her all the way from union turnpike to smedley. she wasnt an angry cow, she was very silent and wasnt pacing at all."

The Farm Sanctuary is a farm animal protection organization and has accepted many wild animals found loose on the streets of New York. They write that Maxine appeared healthy, if scared, when she arrived; she's already met fellow animals Bertha, Penelope and Queenie, another cow found on the streets of Queens. And if you want another heartwarming rescue story, check the one about some ducks and a chicken.