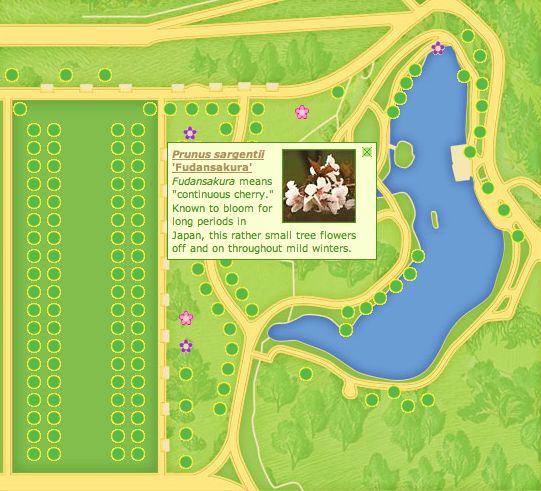 The Brooklyn Botanic Garden has yet again set up their ever-changing map showing "the approximate positions of every Prunus specimen in the Cherry Esplanade, Cherry Walk, Cherry Cultivars Area and Japanese Garden and its current blossom status." Only five have bloomed so far, the others showing buds but no petals just yet (picture of pre-bloom). Last year the garden was bursting with color around the end of April.

When we asked Anita Jacobs and Patrick Cullina of the Brooklyn Botanic Garden when the best time to head over would be, they told us:

Different cherries bloom at different times and the timing is all up to Mother Nature. Generally, the cherry blossoms here are best perceived as a progression. The show usually begins in early April with the Okame and (weeping) Higan cherries. As they are approaching peak bloom, the Yoshino cherries and others like them hit their stride. A wide number of Japanese flowering cherries—with variety names like Ukon and Shirotae—then follow, and the show winds up with the Kanzan cherries at the end of April/beginning of May.

All in all, you're looking at about 5-weeks of cherry blossoms blossoming. This year the viewing period, known as Hanami, runs from April 5th through May 11th.

#Brooklyn Botanic Garden
#cherry blossoms
#Hamami
#map
#petals
#trees
#viewing
Do you know the scoop? Comment below or Send us a Tip