Map: Here's Where Macy's 2015 Thanksgiving Parade Balloons Are Being Inflated

With the mild weather moving in, tomorrow's Thanksgiving Parade balloon inflation should be a pretty good time, if you don't mind the crowds.

The balloons will come to life outside of the American Museum of Natural History starting at 3 p.m.: You enter at West 79th and Columbus Avenue and enter the viewing area which takes you south to West 77th, then east to Central Park West, and then up CPW to West 81st Street. 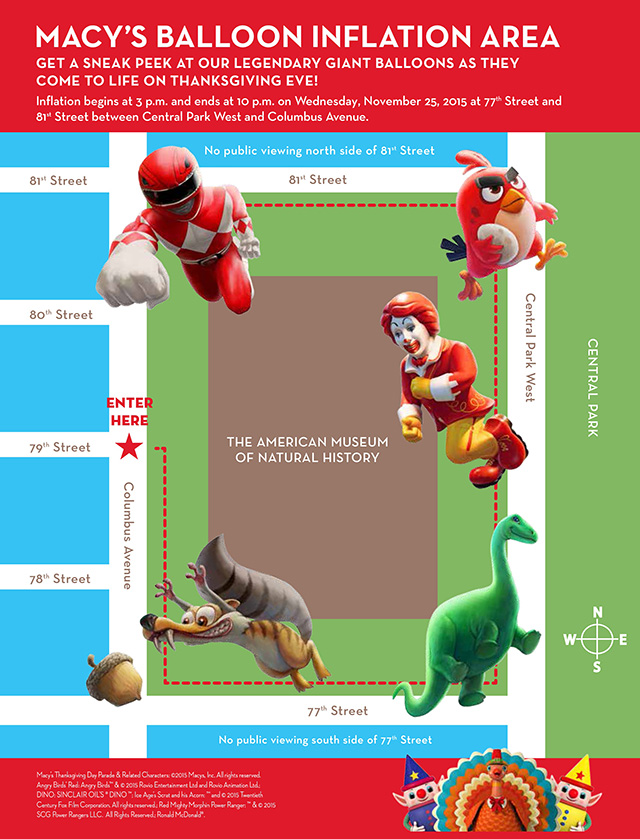 There are four new balloons—Scrat and his Acorn from Ice Age; Ronald McDonald (in his fourth incarnation); the Red Angry Bird; and the DINO™ by Sinclair Oil. DINO was a parade favorite in the '60s and '70s but hasn't been in the parade in 40 years; next year is Sinclair Oil's centennial, so he's back and he's apparently the only life-sized balloon in the parade!

Of course, other beloved balloons are back: Hello Kitty, Pikachu, the Pillsbury Doughboy, Spongebob Squarepants, the Kool-Aid Man.

#macy's thanksgiving balloons
#macy's thanksgiving day parade
#map
Do you know the scoop? Comment below or Send us a Tip
A new Gothamist is coming! We’ve moved comments over to our beta site. Click here to join the conversation and get a preview of our new website.