The Brooklyn Museum has just announced a major exhibition "exploring the life and work of the iconic Mexican artist" Frida Kahlo. The exhibit will open on February 8th, 2019, and feature Kahlo's work—including paintings, drawings, photographs and film—as well as her clothing, jewelry, and other personal items. This is the first time her personal objects (from the Blue House, the artist's lifelong home in Mexico City) will be on view in the United States, according to the press release. A little more on that:

After Kahlo's death in 1954 [when she was just 47 years old], her husband, muralist Diego Rivera, instructed that their personal belongings be locked away at the Blue House, not to be touched until 15 years after Rivera's death. In 2004, these items were unearthed and inventoried. Making their U.S. debut are more than one hundred of Kahlo's personal artifacts ranging from noteworthy examples of her iconic Tehuana clothing, contemporary and Mesoamerican jewelry, and some of the many hand-painted corsets and prosthetics used by the artist during her lifetime. Shedding new light on one of the most popular artists of the twentieth century, these objects illustrate how Kahlo crafted her appearance, and shaped her personal and public identity to reflect her cultural heritage and political beliefs while also addressing and incorporating her physical disabilities.

Kahlo’s choice of clothing, though a purposeful statement of her politics, must also be understood in relationship to her well-documented disabilities. At eighteen, after recovering from a childhood case of polio that left one of her legs permanently weakened, Kahlo was in a horrific bus accident that left her with lifelong injuries, including a severely broken spine. Enduring more than thirty operations during her lifetime, Kahlo convalesced at the Blue House and in hospitals on and off for decades.

The exhibition is titled Appearances Can Be Deceiving, after a drawing by Kahlo, "in which she makes visible the disability that her striking Tehuana skirts and blouses covered."

The show will also delve into Kahlo's time in New York City, where she traveled with Rivera for his work, as well as her own. In 1934, the two had been in town when Rivera was commissioned to paint a mural at Rockefeller Center, but was fired from the project when he included (and refused to remove) an image of Vladimir Lenin (Kahlo and Rivera were active members of the Communist party). A few years later, in 1938, Kahlo was here again for her first and last NYC exhibit (and her first solo show), at the Julien Levy Gallery. The above portrait was taken not long after this show opened, and her career had been taking off both in New York and internationally; it was taken on the roof of a Greenwich Village building.

It's unclear if this will be included, as it was at the 2015 exhibit at the the Detroit Institute of Arts, but it's worth highlighting here. In 1932, as Kahlo's career was just beginning, an article was published with this headline alongside her photo: "Wife of the Master Mural Painter Gleefully Dabbles in Works of Art." According to the Detroit News, the reporter, Florence Davies, asked Kahlo (who was living in Detroit at the time with Rivera), "Are you a painter, too?" Kahlo replied, "Yes. The greatest in the world."

We're gonna go ahead and guess that the headline for Davies' article was the handiwork of a male editor. 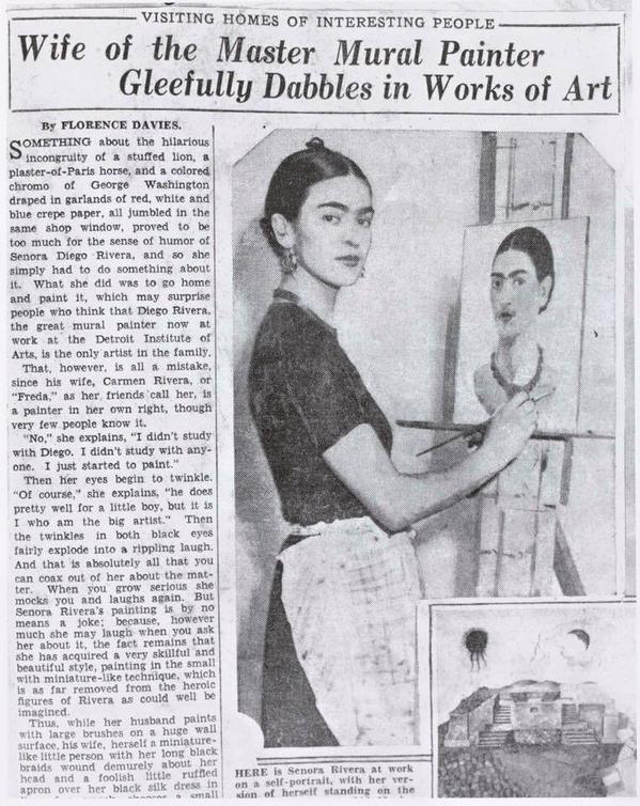 A 1932 headline that most certainly was written by a man.

The exhibit—which the Museum's Anne Pasternak points out "comes at an important time, when it is critical to build cultural bridges between the United States and Mexico"—will only run through May 12th of next year, and will certainly be drawing crowds (the museum has already instituted a timed ticketing procedure).

#brooklyn museum
#frida kahlo
Do you know the scoop? Comment below or Send us a Tip