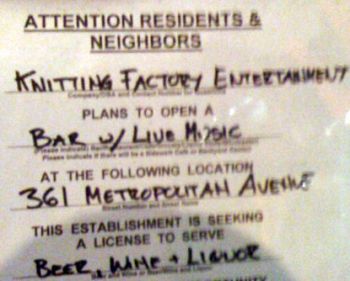 With the Knitting Factory looking for a new home, and Luna Lounge being closed since April, all signs are pointing to the former moving into the latter. In fact, a sign on the front door of the now defunct Luna Lounge says as much.

The closing of the doors came with a sad little announcement on April 26th via their MySpace page, stating "Thanks for all the good times, everybody." The venue had only moved in January 19th the year prior.

Though the problem seemed to stem from the Dept. of Health shutting them down, the venue was likely also struggling to compete with Music Hall of Williamsburg and the yet-to-be-named former Galapagos space. Will the Knitting Factory be able to rejuvenate the East of Bedford music scene? The NY Press asked today if 361 Metropolitan Avenue is where music venues go to die.

We've contacted Luna Lounge owner Rob Sacher to find out if he'll reopen elsewhere, but have yet to hear back. As for Knit, they're currently seeking out their liquor license, as the photo suggests.