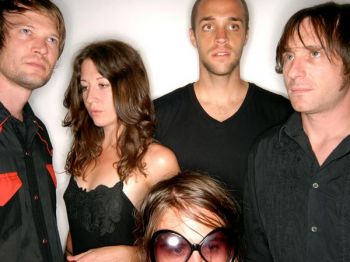 Lowry has entered the summer of '08 with a record deal under their belts, a new album in the can, and a booking at the All Points West festival this weekend--which has them sharing a bill with some heavy hitters. The Brooklyn band won't have to travel far to get to the big stage, but they've been down many roads to get to where they are now. If you are heading to the festival, be sure to get there early Friday to catch their set.

How did you get involved with All Points West? It was very serendipitous. We sent them an early advance of our new record, and they liked it enough to bless us with a spot on the bill. We're obviously thrilled.

Which other acts are you particularly excited to see there? There's always Radiohead, but we're interested in seeing a bunch of folks we've known around the scene for some time. Grizzly Bear, Andrew Bird of course. Nicole Atkins is an old friend and it will be nice to see her perform again.

When will your new album "Love is Dead" be released? It's being debuted on eMusic August 12th, followed by Amie Street August 19th and then it goes across all digital platforms, including iTunes, August 26th. The physical release date and national distribution run begins in late October.

How do the new songs differ from past ones? From our first record, "Awful Joy" which we released in 2005, until now a lot has happened. The band has evolved to understand this little world that's sprung up around the music---and they now share in it equally with me. The material has always originated from real experiences that I've had. The whole thing started from a whole bunch of bad stuff, which led to me making up a fantasy world of song and words. It was an escape, therapeutic, and still is at some level. The songs encapsulated my observations of the world, my own experiences, experiences I wish I could have and worlds within which I wish I lived. Many times I would layer two or three stories into one single song, sort of a palimpsest, if you will. It's a record that deals with heavy topic matter, but I believe that the end of the day there is a lot of hope. Most importantly, the additions of Heidi, Greg, Jasper & Crash to the band have made the largest impact on the evolution of the music.

This has been a big year so far, with a record deal, a new album, APW--what else are you looking forward to? I'm looking forward to getting cable in my apartment. (laughs) I haven't had cable or internet access in 5 years, which leads to a lot of complaints from my friends and my label. (laughs)

Please share your strangest "only in New York" story. This one time, I was at the intersection of 2nd Avenue & Houston in the middle of a beautiful sunny day. The light was red and this car passed a little too close to this guy carrying this cute little pooch in the cross walk. Suddenly, dude with dog does this straight on karate kick to the driver's door who then slams on his breaks in the middle of the intersection with traffic waiting on all sides. My light was green, but I wasn't going anywhere. Most of the people at the intersection were intrigued and the world stopped to watch this encounter. The driver jumps out of his car screaming and throws his car keys at the guy. Then, kung fu poodle guy does this really lame round house karate kick and as the world would have it, the driver suddenly morphs into a similar sort of faux karate clown by blocking the really slow roundhouse kick and throwing out a hand chop of his own at poodle guy. It was like, in the moment, both of them instinctively remembered a few cheap moves from some long lost karate play fight in the neighbor kid's back yard from their pre-pubescent, Enter the Dragon/Revenge of the Ninja years. Keep in mind, the entire time this altercation is happening, the dog is chilling in his owners arms. And then the whole thing ends. Then they snap out of it and sort of walk away from each other. It was purely reactionary on their part and great entertainment for me.

Which New Yorker do you most admire? Christopher Walken

Given the opportunity, how would you change New York? I wouldn't.

Under what circumstance have you thought about leaving New York? I couldn't.

Do you have a favorite New York celebrity sighting or encounter? I almost ran over Kevin Bacon with our tour van in midtown once. I played guitar with Jose Feliciano at a coffee shop on the upper east one night. At least, I'm pretty sure it was him.

What's your current soundtrack to the city? I don't own an iPod so it's the sounds of the people and their stories.

Best venue to play/see music. The subway. Seriously, this is a tough question. All of the classic venues of Rock and Roll are here in NYC. I cannot name one single choice. For intimate rock nights, Mercury Lounge & Public Assembly (in the back) are sure fires. The Bowery Ballroom and Irving Plaza are obvious choices for the bigger parties. But if you're just playing acoustic, it is impossible to ignore The Living Room (quite possibly the best sounding small room on the planet) and Rockwood Music Hall.

#All Points West
#band
#interview
#Lowry
Do you know the scoop? Send us a Tip
A new Gothamist is coming! We’ve moved comments over to our beta site. Click here to join the conversation and get a preview of our new website.