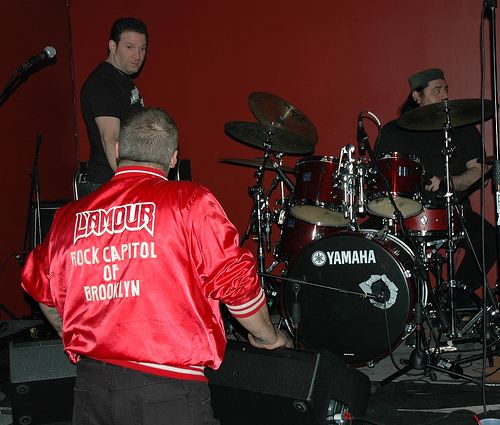 In 2005 fans of heavy metal were darker than usual when their mecca, L'Amour, closed up shop after a teenager was killed while diving into the mosh pit. The club had been going strong for two decades throughout which time they booked many rising stars - Metallica, for one. Any metal band worth their weight in black jeans and double-neck guitars soon stopped by to play, even after they had made it big (like KISS).

Playing L'Amour became like a badge of honor in the rock community, turning 1545 63rd Street into the Rock Capital of Brooklyn. After a few years, the venue is finally reopening...but this time it's going to have to be the Rock Capital of Staten Island, as the new venue will be in Rossville. Longtime lover of L'Amour, Tom Cassidy, tells Metro that back in the day "you’d put on your tight jeans, do your hair, because you knew there would be 500 single girls that were easy.” Will guys start using hairspray again? Probably not. But L'Amour is starting out with a bang with LA Guns being one of the first to take the new stage. Another show worth checking out: the Led Zeppelin cover band Earls Court (with Type O Negative drummer Johnny Kelly playing the role of John Bonham). Those are both next week, but coming up in just two days...Girls, Girls, Girls will rock out Rossville with Motley Crue tunes. Hopefully the club will be able to catch more rising stars in its new location, saving it from turning into place where cover bands come to get their own badge of honor.

There's a MySpace profile up and running for the reopened venue (click the link if you wanna hear Guns n' Roses "Sweet Child o' Mine"), where all of you up n' comers and rock n' rollers can contact the place to play. Unless of course you proclaim yourselves to be too good for it, as We Are Scientists did back in 2001. One word for them: Boo.