Lovesick Joe Is Still Searching For Sofia In Subway System 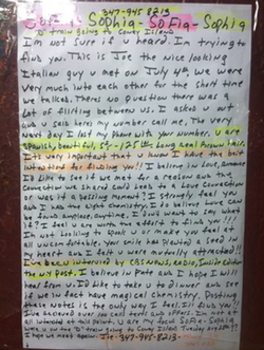 Joe's new letter is longer, read it below.

Late last month we caught up on the saga of one man's struggle to find his true love. Or a love. Or just some lady that may sleep with him. The man, known to us only as Joe, has been hanging up signs all over the subway system (old school Missed Connection style), and has become somewhat of a beacon of light for hopeless romantics. His posters read, in part:

"Sofia. This is Joe. The good looking Italian you met on the D train at Coney Island July 4th: U and I had strong chemistry in the few minutes we talked... U were about 30, Spanish, long real brown hair, 125-130 lbs, real pretty. I hope we will meet again soon Sofia!!!"

He left his number (which was out of service), but weeks later it seems he still hasn't met his Sofia. This morning a reader sent in the above photo, telling us, "I actually met him! This morning I was on D platform at Atlantic/Pacific and I noticed a guy putting up the same flier... immediately I asked him, 'Are you Joe?' He was a little hesitant/shy about it at first, but he told me yes he was."

This whole thing started on July 4th when Sofia and her friend were sitting across from Joe on the subway, but beyond that and what's on the flier, that's all we've known... until now. When our tipster was prodded for more info, she told us:

"He noticed her friend had a wedding ring on, but she didn't. He said that she was wearing sunglasses, but that he could tell by her body language and the way she was smiling at him when he smiled at her that she was interested. He said when she was about to get off the train, she took off her sunglasses and looked directly at him with a 'Aren't you going to come after me?' kind of look. I think at this point he got off the train and talked to her for a few minutes. He asked her, 'I noticed your friend is married... are you married as well?' She said no, and he asked if he could take her out to dinner. She said yes, and gave him his number which he says he entered into his phone... but never called or texted, and later that day, he says he lost phone."

So then the fliers came into play, which Joe puts up on his way to or from work in Manhattan each day. Sounds like a pretty full day, but Joe has managed to find some screen time—our tipster tells us he read our previous article on his search, saying, "it was a nice write-up, aside from [being likened] to a serial killer!" 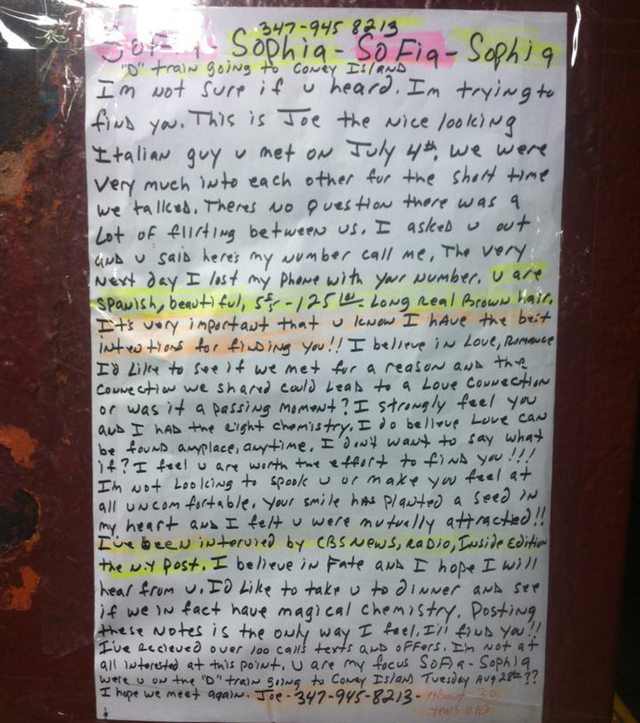 #joe
#love
#poster
#sofia
#subway
#original
Do you know the scoop? Comment below or Send us a Tip