With Louie on a semi-permanent (or permanently opaque) hiatus, things have been pretty quiet from Louis C.K. lately (give or take Baskets and a few other shows he's producing). But that's just because he apparently has been working on a secret new project, Horace & Pete, which he surprise-released today. 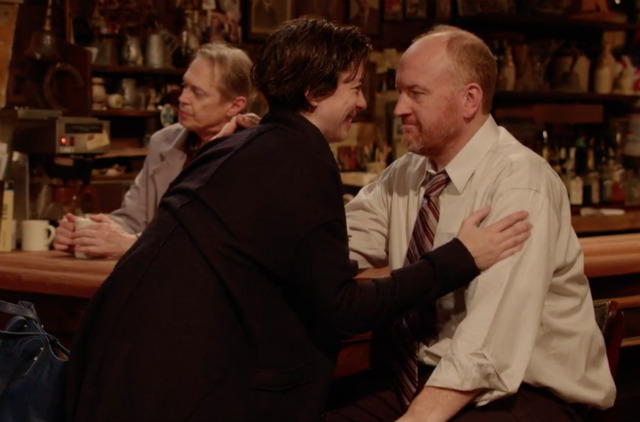 In an email to fans titled, "A Brand New Thing From Louis C.K.," C.K. didn't offer many details about the show: "Hi there. Horace and Pete episode one is available for download. $5. Go here to watch it. We hope you like it. Regards, Louis." There's no description or explanation of what the series is about, but the first episode is 67 minutes long, was written and directed by C.K., takes place in a Brooklyn bar, and is staged like a play.

Initially, it comes across like C.K.'s unique take on Cheers (plus a dash of Death Of A Salesman), with an emphasis on the depressing realities of life for barflies and bartending lifers. It definitely seems to lean far more toward the dramatic side than the comedic.

C.K. stars as Horace and Steve Buscemi is Pete, who run a bar together; Alan Alda is their grizzled, racist uncle (also named Pete), and other comedians, actors, and Louie friends such as Nick DiPaolo, Kurt Metzger, Steven Wright, Jessica Lange (as C.K.'s father's former lover), Edie Falco (as C.K.'s sister), Rebecca Hall (as C.K.'s girlfriend), Aidy Bryant (as C.K.'s daughter) and more show up throughout the episode. It also must have been filmed in the last week or so, since the characters touch on topical hot button issues, including Donald Trump's candidacy and Super Bowl quarterbacks. There's also an intermission.

Oh, and the theme song was written by none other than Paul Simon!

#horace and pete
#louis c.k.
#steve buscemi
#web series
#original
Do you know the scoop? Comment below or Send us a Tip