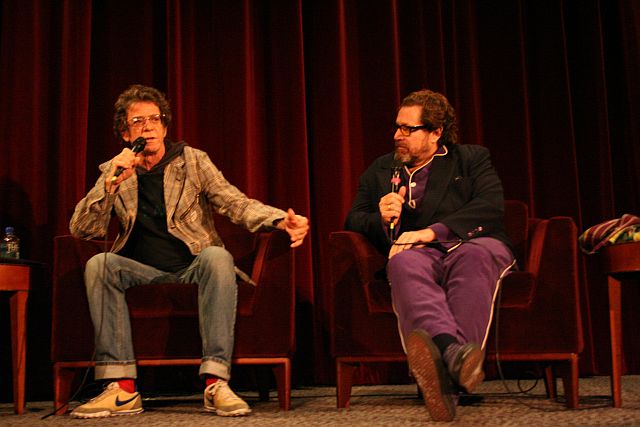 In 2006, Lou Reed revived his album Berlin by performing it in its entirety with a small orchestra for five sold-out shows at St. Ann’s Warehouse in Brooklyn. The 1973 album, which riffs on themes of drugs, love and suicide, was a commercial failure when it came out; Lester Bangs described it as “the bastard progeny of a drunken flaccid tumble between Tennessee Williams and Hubert (Last Exit From Brooklyn) Selby, Jr.”

But in artist/filmmaker Julian Schnabel’s hands, Berlin is anything but flaccid: His new concert documentary, culled from three nights at St. Ann’s, has captured Reed’s cult classic in all its decadent, rattling vibrancy. The sound is exquisitely crisp, and the concert footage affords an up-close, color-saturated view of the performances – Schnabel’s crew even caught Reed’s immaculately sour lips turning upward at the edges in what can only be described as a smile.

Backed by (deep breath) brass, cello, viola, flute, percussion, keyboards, bass, the Brooklyn Youth Choir, Sharon Jones, Antony, and guitar virtuoso Steve Hunter – who played on the original recording – Berlin actually swings; even the downer ballads have a certain soulful buoyancy. In addition to directing, Schnabel designed the sets, while his daughter Lola filmed supplemental montage footage of Emmanualle Seigner flitting about as the album’s “Caroline.” Though lovely, it doesn’t add or subtract much from the movie’s dour star, who actually seems to be enjoying himself.

Berlin will open in NYC at Film Forum on July 18th; last night’s screening was part of the Conversations in Cinema series to conclude the 2008 Tribeca Film Festival. After the jump, some outtakes from Reed and Schnabel’s chat with Vanity Fair’s Lisa Robinson. 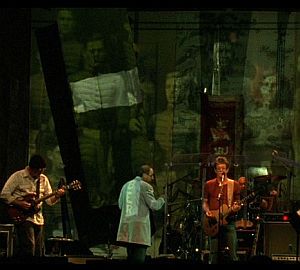 Schnabel: "I didn’t want this to be some fancy filming with cranes and things like that. So we got the opportunity to invite and audience and I said, 'Okay, there’s going to be a camera person onstage if you don’t mind.'"

Reed: “Julian knew the record better than me. He could recite this piece of music. And he asked me, ‘Why wouldn’t you want to do that?’ And I said, ‘But I did to that.’ And he said, ‘Well, that was then and now we’re over here.’ So I said, ‘Okay, why not do that.’"

Schnabel: “You know what’s interesting is that he lives across the street from me. I remember when I told him I wanted Lola to do this and my brother in-law to do this, he said to me, ‘What, are you kidding? Your daughter and your brother in-law? Aren’t you going to do it? Don’t you have time?’ And I said, ‘Come to my studio and I’ll show you the stuff and you tell me if you don’t want them to do it.’ So all of these great images you’re seeing, like the paint on the negative and this shaman-looking character running in the snow… There’s a film Lola made when she was 17-years-old in there… This whole thing was brewing since he made this record in 1973 and she started making films –”

Reed: “He brought me to his warehouse, puts Berlin on and shows me Alejandro Garmendia’s floating furniture and then some things by Lola and it was just serendipity, the way they meshed immediately. To me it was like can’t miss; these sensitivities are too similar and Lola did such an amazing job. No slouch Lola.

Robinson: “Your voice has changed since you originally recorded it. It’s deeper now, right?”

Robinson: “You’re a songwriter, poet, photographer, guitar player. But people still try and pigeon-hole you and are surprised you take great photographs.”

Reed: “Somebody said ‘the act of writing is an act of optimism.’"

Schnabel: “That’s a fragment of something [Andrei] Tarkovsky said. He said that art is different than life because art is a representation of life and therefore it doesn’t contain death. Life contains death. So making art is life-affirming. So even if the art is tragic, it’s still optimistic. There can never be pessimistic artists, there can only be mediocrity.

Audience question: “Lester Bangs said Berlin was the most depressed album ever made. What are your thoughts on that?”

Reed: “I don’t have any thoughts on Lester Bangs’s comments. What does that have to do with anything? You just saw it.”

Schnabel: “I just thought it obviously made me want to make the movie.”

Robinson: “I just want to say we knew Lester Bangs and would not 35 years later quote him. However –”

Reed: “Who is Lester Bangs?”

Schnabel: “Isn’t he the guy who Chris Walken drowned in At Close Range?”

Audience question: “There were moments when you were in such an wonderfully intimate and open zone and I don’t know if we’ve had that kind of access to you before. Was there anything in the film that you saw that surprised you about your performance?”

Reed: “Well, in the old days I would have worn sunglasses and you wouldn’t get to see any of that. But I can’t wear the sunglasses now because I’d fall over a cable. I’m there as a version of me – the performing version. It is what it is. I wanted to write these monologues for myself. I love acting in a role in a song and I write the monologue for myself. That’s my idea of fun… To me Berlin is an amalgam of when a woman does a certain thing to you, you end up with Berlin.”