As best I can tell, the Ramones never played Arlene's Grocery, a dive bar and concert venue on the Lower East Side. Converted from a bodega-slash-butcher in 1995, the spot only began showcasing up-and-coming acts a year before the Ramones played their last show. Despite this, a band that recently performed there experienced an auditory oddity while onstage: The guitarist—conscious of the fact that he was strumming along to his own music—could hear only the low, clipped whine of Joey Ramone reverberating on an eerie loop inside his skull. This musician, who reported only a passing familiarity with the Ramones' canon, found the experience flukishly creepy, unsettling enough to call in the experts. And that is how I wound up at Arlene's on a recent Monday night, watching a turbaned shaman wave his hand over an aging scenester's head, listening to her beg her "baby boy" Joey to let her know he'd finally been sedated; looking for Joey Ramone's ghost in Arlene's Grocery with the Brooklyn Paranormal Society.

Joey Ramone died of lymphoma in April 2001, at age 49. During the band's heyday, he did haunt the area surrounding Arlene's: CBGB used to sit at 315 Bowery, the band bought clothes at Trash and Vaudeville on East 7th, the frontman himself occupied apartments on E 2nd Street and in the St. Mark. Indeed, Joey Ramone Place—at 2nd Street and Bowery—sits a 10-minute walk from the bar. But if you were a ghost—unbounded by the constraints of distance and time, faced with limitless locations for spooking—would you pick Arlene's Grocery to haunt, or would you attach yourself to a more meaningful location with personal significance? 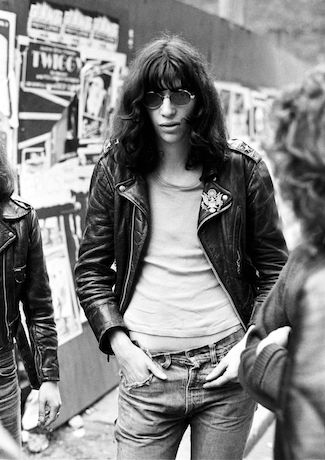 Further straining my credulity, Anthony Long—founder of this ragtag ghost-seeking club for "spirit-curious millennials"—assured me in a call two days before the hunt that he does not "believe in that shit" (that shit being ghosts), although, "In this line of work that we do, when you receive tips that have these kind of clues in them, you go the direction that it takes you." An avowed skeptic, Long admits he's never seen a ghost in his 30-plus years of existence, nor in the three-plus years he's spent seeking them out specifically.

"It's really rare that you get a report of people seeing a ghost or actually seeing a spirit, it's always more of a sense or an intuition or a vibe that someone else was there," he explains. Long's whole philosophy seems to rest on a principle neatly encapsulated by the 1972 Philip Experiment, in which a handful of non-psychic normals manifested their own haunting after convincing themselves a historical character they'd made up was real. The lesson: If you believe in, or at least feel somewhat receptive to the possibility of, ghostly energy, then you might just experience it; if you don't, then you won't.

Convenient as that premise may be, my life would not be made less exciting by a brush with a dead rockstar, so I am game for this. We are after happenings that feel "too unlikely to be coincidence," Long tells me. Using cameras, audio recorders, an app-based "ghost box"—a device that scans rapidly through radio frequencies, spitting out small snippets of whatever's on the airwaves, which spiritualists then cobble into some kind of message from the other side—and electrical sensors, plus the psychic services of the two separate shaman, we would attempt to pull back the veil and speak with Joey. And when you ask questions of the ether, it helps to have a point of personal connection; someone who knows the deceased well enough that they might share experiences about which no one else could possibly know.

"I knew Joey Ramone through my friend Annie Golden, who had a band called The Shirts. She's very well known," Serena, an affable retiree who formally worked as a hairdresser to rock 'n roll types, tells me. We are cloistered in a back booth in Arlene's Butcher Bar, the space festively strewn with nylon batting and twinkly orange lights for added October ambiance. Serena has a voice like cigarettes. 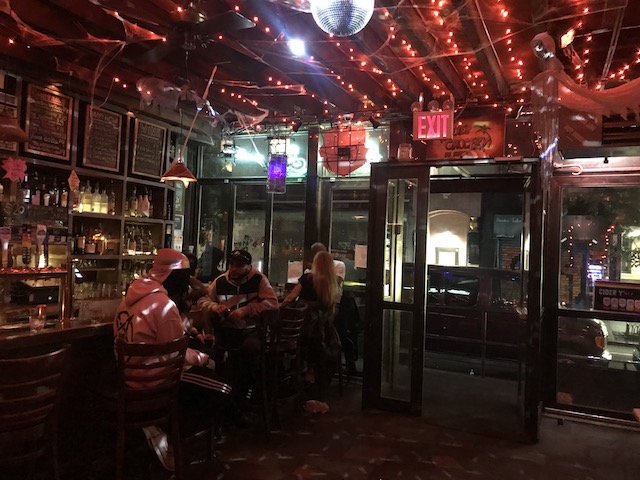 "We had a beautiful birthday party for Richie that Annie made at The Shirts' house," she gushes, "and Joey was there." Serena remembers a few clear things about her first meeting with Joey: One, that he couldn't go anywhere without a cloud of obsessive admirers wisping around as one in his wake; and two, his Gumby build, a wiry tower of bendy limbs. "He was so tall and lanky that when he would give you a hug or hold you, say hello, it looked like his arms were wavy. I will never forget that."

Serena says she met Joey sometime between 1978 and 1981, and maintained what sounds like a social friendship sustained by overlapping circles: They never shared a meal, she never learned Joey's real name, and they lost touch before the early aughts. Still, we are milking this association because it is all we have. Serena's daughter Michele—a self-proclaimed sensitive who admits she never met the man of the hour—insists she felt Joey's presence emanating joyful recognition the minute her mother entered Arlene's. "I just knew it was him," Michele tells me. "It was the energy, and I just started laughing because I guess he'd just noticed her, so he was excited." Ghost Joey, Michele said, telegraphed the exuberant feeling of seeing an old friend for the first time in years. And Serena, after hearing this, enthusiastically confirmed that she could feel him, too.

A series of delays, however, dampened the collective enthusiasm. Concerts planned in conjunction with the event ran late. The bar stayed too loud for too long, and once the floor cleared, then the BPS had to set up equipment. I attempted to entertain myself on a series of personal jaunts: Michele said the bathroom housed frenetic, pestering energy, so I cased the joint, making a recording (just my voice asking an empty stall for its name) and snapping photos (disappointingly bare of ghoulish orbs). I downloaded a ghost-hunting app and scanned the Butcher Bar for paranormal phenomena (present: one "errant spirit" named Rosa, a blinking amoeba-like blob). I thought hard about whom I will haunt, and how (no spoilers here but I can tell you right now it won't be just any old bodega). By 10:30, however, I had exhausted all my options and too much of my phone's battery, and joined the two shaman who sat vacantly watching a Korean horror movie playing on the bar TV. I allowed my eyes to glaze as two bloodied men wrestled on the side of a rogue train car chugging—in much the same fashion as the evening itself—down a track to nowhere. Then, around 11, Long announced that we were ready for action.

Whereas I passed the hours poking around in the basement and staring into space, others spent their time doing what one typically does in a bar. Long and one of the shaman, James Coleman, lit sandalwood incense in the concert space—"to get us all settled down, so we're not in the way," Coleman explained—but our star witness, our would-be conduit, would not be settled. As our hosts attempted to quiet and collect the small crowd, Serena stomped around in a circle, drink raised in the air, bopping along to "I Wanna Be Sedated" and happily lost to her own agenda. 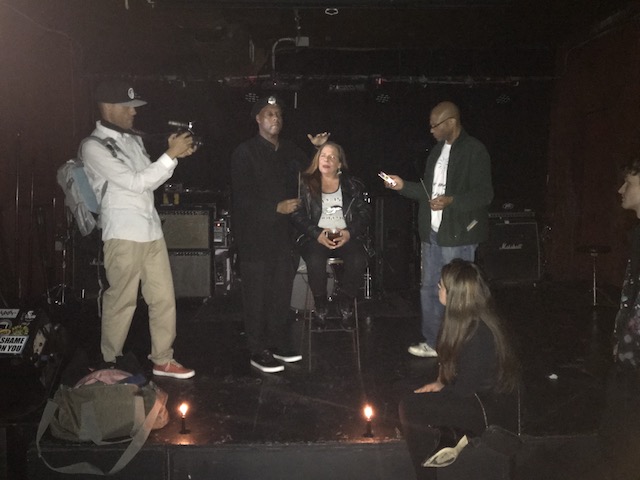 That agenda overlapped with Long's, but did not really align. Instructions flew over heads as the other shaman, Kor Skeete, wrangled Serena onto a stool in the center of the stage. He stood to her left, positioning his palm over her head to collect whatever energy emanated from it, while Coleman planted himself on her right, ghost box in hand. Green and red lights ricocheted futilely across the ghost box screen, pinging non-sequitur words like "club" and "exercise" at random intervals. Meanwhile, Serena blithely ignored Long, making her own personal demands of Ghost Joey. "Joe we're here now to acknowledge your beautiful-ness, and we heard that you were over here in this area because you lived here," she rasps. "Joey, if you're here baby boy, just say, I'm here! And say, I'm sedated." But ghosts, apparently, require direct questions answerable in just a few words. Skeete attempted to lead her back to the process, as some of the more vocal ghost hunters in the crowd threw in their own input.

"Did you call him Joey all the time?" he asks. "There could be a Jeffrey involved, is there a connection to Jeffrey?" This clue went undetected by Serena: Jeffrey Hyman was Joey's given name. I suspect the shaman knew this. I suspect Long knew this. And at roughly that point, he seemed to throw up his hands, and switched gears to another attendee who'd recently contacted the BPS to report that his apartment had lately been plagued by a poltergeist. The clock ticked toward, and then past, midnight as members of the assembled audience talked over one another, fighting to thread the needle and sew together some semblance of a haunting. But if Joey had been here, we had missed him.

Serena, however, felt satisfied with the experience. She'd "definitely" sensed Joey's presence while she sat onstage, she told me in a post-game. Along with three small tailbone taps, she said, she'd felt an "amazing" warmth creep over her body at mention of his name. "I know he's here," she assured me. "I know he's here."

If you want to see it, you will.

#arlene's grocery
#brooklyn paranormal society
#ghosts
#joey ramone
#LES
#original
Do you know the scoop? Comment below or Send us a Tip
A new Gothamist is coming! We’ve moved comments over to our beta site. Click here to join the conversation and get a preview of our new website.