When Woodstock '94 happened, I was housesitting about 80 miles away on the shore of a lake in Connecticut. The people whose house I was looking after had a black box, which... I'm not even sure if those are around anymore, but they were like the internet in that they let you watch anything for free, and also in real time (so in some ways, better than the internet). They were very illegal! Anyway, since Woodstock '94 was being broadcast over Pay-Per-View, the black box enabled me to watch it for free... which was nice, since those people never actually paid me for housesitting. (There was a dog, too! It bit my mom when she was dropping off groceries!) 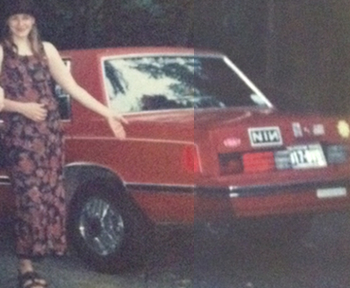 A dope NIN sticker on my cherry red Plymouth Reliant K car, which cost me $500.

I was 17 years old at the time, and about to enter college, so the housesitting gig sort of gave me a taste of what my new life would be like. I could smoke cigarettes out in the open, drink all the wine coolers I could get my hands on, have boys over, listen to music very loudly, and never go to sleep. During the three days of Woodstock '94, friends were in and out of "my" house, and sometimes this hot soccer player I was seeing at the time would come over and we'd make out during the sets of the bands we didn't like that much. I don't remember ever feeling like I wanted to be at the festival myself, but there was no social media to make me feel that fear of missing out.

Cool side story: When I went to college a few weeks later and met my roommate, I found out she was friends with that guy I was seeing (they were from the same hometown, which bordered mine). In fact, she had a photo of him up on her corkboard—in it, he was playfully picking up his girlfriend. "No, no... I've been seeing him all summer," I explained. "Well, he's been dating my friend for four years!" BRAD. He's bald now.

There I was, living in between innocence and experience and about to suffer some minor heartbreak. So thank God for Nine Inch Nails, a band I already loved at the time but was about to become fully obsessed with, thanks in part to the Woodstock '94 set. Trent Reznor covered in mud is probably responsible for giving me the final push out of adolescence, and their songs definitely helped me silently scream my way through that aforementioned oncoming heartbreak.

Another highlight from the 3-day fest was Blind Melon, LSD rumors aside. For those who only know this band for "No Rain," do yourself a favor and visit their entire catalog. Shannon Hoon was a massive talent, who tragically died of a cocaine overdose a little over a year after this set.

Then we had Green Day, who added a punch of fun-punk to day 3:

Prop-rock band the Red Hot Chili Peppers probably provided one of the other more memorable images, with their lightbulbs:

And then of course there was Metallica:

Primus, Salt N' Pepa, The Cranberries, Cypress Hill, Aerosmith, James, Candlebox, Blues Traveler, Violent Femmes, and a bunch of others also played. About 350,000 people attended the festival, which was held on Winston Farm in Saugerties, NY—one man in attendance told the NY Times, "I learned the wrong lesson at Woodstock. I learned I love my meaningless little life and all my materialistic things—my car with air conditioning, my bed, running water." And when it was all said and done, not finding that peace and love mentality of the 1960s was probably the worst thing that happened.

Jon Pareles noted that things went fairly smoothly, and "the audience didn't riot." But that would change five years later, when vendors gouged concertgoers $4 for bottles of water and Limp Bizkit's Fred Durst told an already volatile crowd, "I don't think you should mellow out. This is 1999, motherfuckers—stick those Birkenstocks up your ass!"

Did you make it to the show in 1994? Did the corporateness of it turn you off? Did you watch it via a black box? Were you conceived there?