Caroline Caldwell, 24, says inspiration for Art in Ad Places, a year-long takeover of phone booth ad space she co-launched in January, came in the form of a billboard for butt lifts near her Greenpoint apartment. "There was a giant billboard advertising a thousand dollars off a Brazilian butt lift. It was comically large and in-your-face. As much as we were laughing it was like, 'No, but seriously, what are we going to do about this?'"

According to Caldwell, the billboard fell into a category of sexist ads that have bothered her for some time, including breast implant ads on the subway. She and her boyfriend, 26-year-old RJ Rushmore, have participated in ad takeovers in the past, making the case that corporations shouldn't have absolute control over messaging in public spaces. "We had posted a few photos of us pulling down ads of plastic surgery for women, and people were like, 'Burn them, draw on them,'" she said. "And most of the people responding were like, 'We're really glad you took those down.' So that was how it got started." 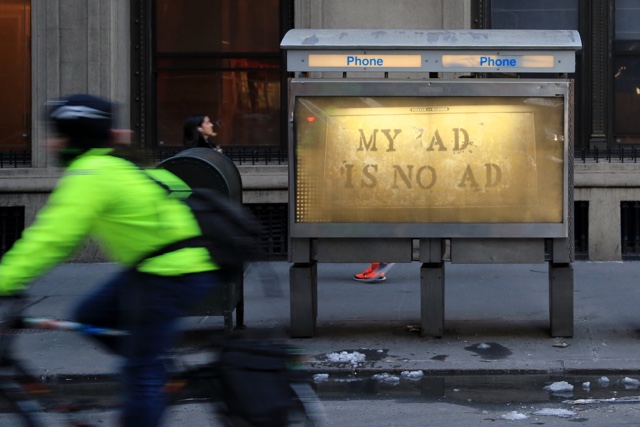 Caldwell and Rushmore (an artist and social media manager respectively) did their first phone booth takeover in January, starting in Brooklyn with a 26 x 50 inch print of "Shipwrecks of Unicorn Beach" by chandelier maker and photographer Adam Wallacavage. They've since featured Tatyana Fazlalizadeh (the artist behind Stop Telling Women To Smile), Molly Crabapple and Shepard Fairey, among others. One print goes up each week, and typically lasts for between one and seven days, depending on how quickly Caldwell and Rushmore post it on Instagram. Photographer Luna Park shoots each one, posting alongside an artist statement.

The couple decided to target phone booths, according to Rushmore, because of their diminishing public benefit. "The infrastructure is there, but it doesn't serve any purpose," he said. "The basic concept for the payphone company is, 'We'll provide you with payphones and maintain the infrastructure. In exchange we'll serve you advertising.' Well, many of them aren't working anymore. It seems like a really bad deal!" 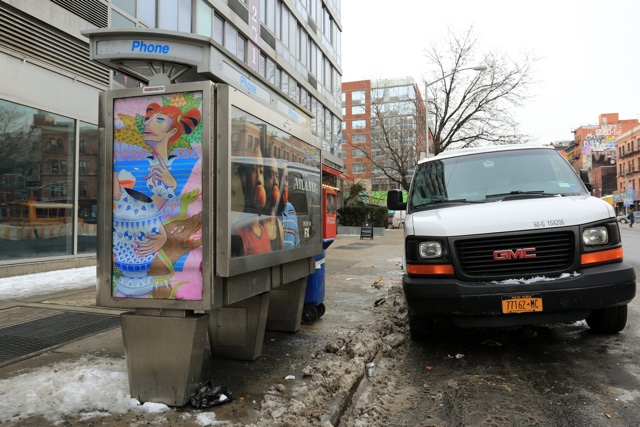 Each guerrilla installation takes about five minutes, using a security screwdriver. So far, there haven't been any repercussions. "Our names are out there," Rushmore said, laughing. "I'm not calling you with a voice modulator or anything."

Caldwell and Rushmore have scheduled artists to feature through the end of the year—about half of the total have "strong ties" to NYC—planning ahead in part because it's cheaper to print in batches of ten to twenty (the project is self-funded; artists just give their consent). And while the couple won't confirm exact addresses for installs, Rushmore says they've already hit every borough but Staten Island.

Art in Ad Places is not affiliated with The Resistance is Female, another 2017 NYC phone booth takeover. "They have a more specifically anti-Trump aim than us," Rushmore said. "We've had some pieces that are more explicitly political, and some that aren't. But we're all about how the public should have more public art."

This week's installation, by the excellent photographer (and occasional Gothamist photographer) Tod Seelie, is somewhere in Brooklyn.