All day long, a community of very strong men walk through a dingy foyer and up a narrow staircase on Williamsburg's Southside. Dressed in sneakers and tank tops, most are sweating already as they twist their broad shoulders through a third floor doorway and set upon rusted dumbells. Even with the sunlight coming through the windows, the gym feels like a dungeon populated by medieval giants. They all seem to know each other. Above a stereo blasting rock music and the clanging of heavy plates the weightlifters cheer one another by name, and overseeing it all is a sinewy 76-year-old man with a knotted beard. He runs the place.

Santos "Frenchie" Ramos has managed his namesake gym at 303 Broadway for 40 years. He has no business partners, no shift schedule, and no staff. Instead, the former bodybuilder and professional wrestling referee still works 70 hour weeks to keep the doors open and membership fees low. "For me, it's been a struggle. I haven't become rich. I live in city housing," Ramos said. "I manage. I don't drink, I don't go out. The gym is my second home."

When Ramos opened his gym in 1976, Williamsburg was slipping into chaos. Young gangs like the Dirty Ones had a presence on the streets and mob bosses were setting up front operations. Thieves broke into the gym multiple times over its first few years. "When I came in, nobody wanted to come here," Ramos said. 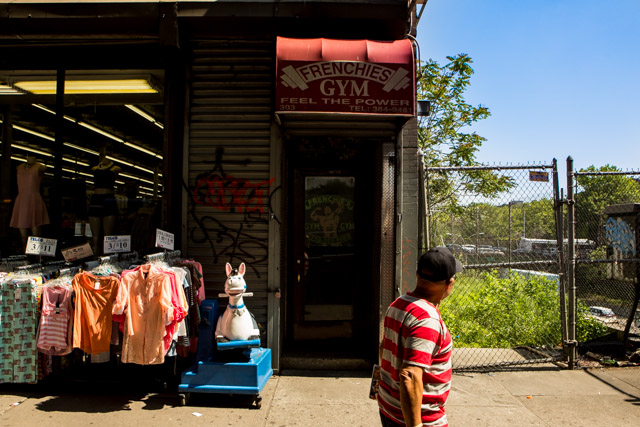 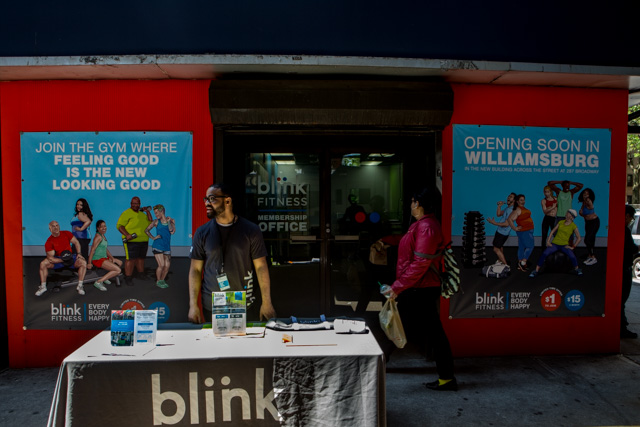 Blink sets up across the street. (Scott Heins/Gothamist)

But today the neighborhood is the universal yardstick of urban cool. Its population has grown and changed significantly since the mid-'70s and now a flock of discount gyms have arrived, including Retro Fitness, Planet Fitness, Crunch, and Blink, an Equinox-owned chain whose brand hinges on an cheery "Mood Above Muscle" attitude and also $15 monthly rates. Blink Williamsburg is positioned directly across Broadway from Frenchie's Gym. It opens tomorrow, and Ramos is worried.

"Up against a big corporation like that, who am I?" he asks. "It's my belief they've come with the intention to knock me out of business. It's like I've got a knife in my back."

Since he opened, Ramos says he has put almost every dollar his gym has made back into the business. He has over a hundred members that each pay $30 in monthly dues, but it's not always enough. Five years ago his Social Security kicked in—$1100 every month—and in order to pay the bills he would sometimes put the entire check toward the gym's rent. This went on for two years, until finally a few members pitched in on top of their dues and got the gym back on its feet.

Ramos declined to say how much the monthly rent is, but told us his landlords have always been fair. “They treat me nice,” he said. “As long as they have me here, I’m going to keep on paying."

Ramos was born in Guanica, Puerto Rico and and moved to New York City in 1966. While working in a Manhattan factory assembling watch parts, a coworker suggested he try weightlifting. 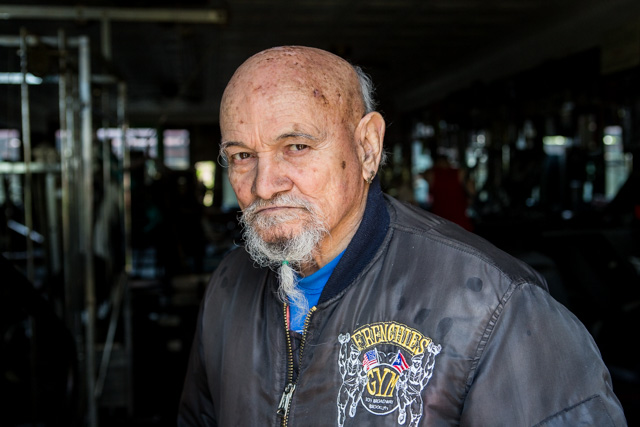 He was immediately obsessed. Ramos joined the Chelsea YMCA and would spend hours after each workday building his muscles. Soon, he was entering local contests and when the opportunity came he opened his own gym. "I fell in love with the gain, it was in my blood," Ramos recalls. "I fell in love with bodybuilding, not the money."

The walls of Frenchie's Gym show a life built around muscle: there are photos of him as a young man flexing a chiseled physique, later stills of him in a blue shirt and bowtie officiating at the first Wrestlemania, and candid images of him in his own gym, training students.

And there are other faded photos that show Ramos holding a small, smiling boy: his son, who was stricken with muscular dystrophy. When his son was young, Ramos changed apartments inside the Bed-Stuy Sumner Houses, so that he could avoid going up stairs. On days when his son wanted to visit the gym, Ramos would lift him out of his wheelchair and carry him on his back up the three long flights. In old photos, father and son flash giant smiles, but the memories haunt him today. Ramos's son died in 1985 at age 22.

"I still cry like a baby. Some times at night, it's hard" Ramos whispers. "I don't know how else to put it."

Just as his voice is about to break, another customer walks into the weight room dressed in sneakers and sweats. "Hey hey, Frenchie!" he calls, holding out a cup of coffee in his enormous paw. The bodybuilder gently sets it down on Ramos's cluttered desk, and both men smile and shake hands.

"These are my disciples," he says. "And the people coming here have become part of myself, my family. They come from different countries, young guys, they come, and they leave their family, their fathers. Most of the people that come, they don't have papers, and sometimes they look to me like a father figure." 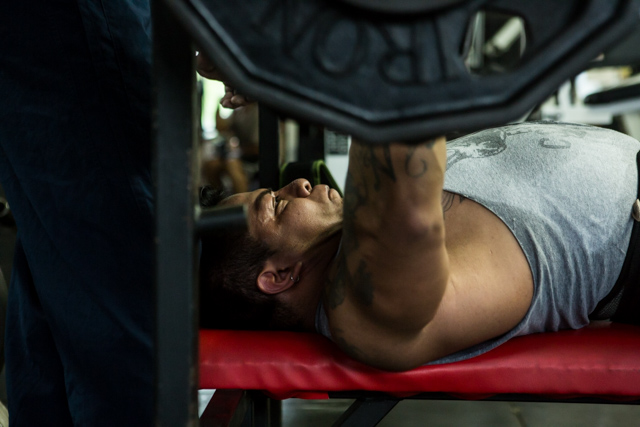 Across the weight room, Jose Sanchez, 33, watched his younger brother Pedro bench press. Sanchez has been a member at the gym for 12 years, and has put on 100 lbs since he first joined up. "Everybody comes here and Frenchie's always in his chair. If you have questions or problems, he'll sit and talk with you."

"It doesn't matter who walks through that door. It don't matter their religion, sexual orientation, or wherever you come from. You are welcome in here, that's it. Everybody," Ramos says as he reaches for the coffee on his desk. "High heel, no heel, they're welcome."

"He helps you, he coaches you," Cesar Reyes, 39, said as he paused between lat pull-downs. Reyes can't imagine Blink, or any other discount gym, seriously threatening Frenchie's. "I've seen plenty of gyms. It's not about the place, it's about the person. It's about what you put into this, the heart."

For now, Ramos remains optimistic and plans on sticking to his guns. His membership fee remains unchanged even as Blink's laminated discount signs glisten across the street. He says he'll continue to show up, Monday through Saturday, at 7 a.m. and open up by 9. He also says he'll continue to offer a personal touch to his bodybuilder clientele that no branding, app, or economy of scale can match.

Ramos finishes his coffee. "You see how well my disciples treat me?" he chuckles. "Sometimes, they even bring me breakfast. I'm a rich man, in my own way."

Multiple requests for comments from Equinox and Blink on this story went ignored.

#Blink
#Crunch Gym
#equinox
#Frenchie's Gym
#gentrification
#Planet Fitness
#santos ramos
#south williamsburg
#williamsburg
#original
Do you know the scoop? Comment below or Send us a Tip
A new Gothamist is coming! We’ve moved comments over to our beta site. Click here to join the conversation and get a preview of our new website.