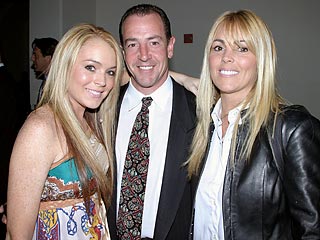 Following their Nassau County Family Court appearance yesterday regarding visitation rights, Michael and Dina Lohan held a joint press conference to let the press know they will no longer be talking to them. In fact, The Daily News reports that Dina's lawyer said the two want to keep their lives private. Presumably they mean starting now, but everyone with basic cable is given a weekly (albeit edited) glimpse into Living Lohan on Dina's reality show, and Michael blogs about it for OK! Magazine. Still, the two would like to control the press and dim the spotlight on the family's little secrets (even if everyone can see their most famous daughter's private MySpace profile).

"They really want the press to stay out of their lives," said Eugene Russo, Dina's lawyer. "They're doing what's in the best interest of the children. They would appreciate if they are allowed to participate in the childrens' lives without the press."

As the two left - separately - Michael told reporters they will stay mum.

"We've decided to keep everything out of the press," he said. "She will keep her sources from saying things. I'm not going to have anyone say anything."

On that note, after the closed door court appearance, someone said the "lengthy off-the-record conversation about claims that Dina is blocking Michael from seeing his four kids" was extremely encouraging, however, Michael Lohan is accusing Dina of not including the two younger kids in the court-ordered visits, and has shown up drunk a few times. The two will be back to court on July 14th.

#court
#dina lohan
#michael lohan
#press
#press conference
Do you know the scoop? Comment below or Send us a Tip