Just off the roaring Brooklyn-Battery Tunnel and a few minutes from Wall Street, the scaffold-encrusted blocks of lower Washington Street are strangely quiet. In the shade of neighboring skyscrapers, these sterile streets have so far resisted realtors' attempts to rebrand the neighborhood as an up-and-coming residential district, and they invite little curiosity from passersby.

Yet for a small group of activists and academics, this area has special significance. It is the site of the City’s earliest Arab community, a former, thriving enclave known as "Little Syria." For the past five years, this group—known as the Washington Street Historical Society—has sought to bring the legacy of Little Syria back to life for contemporary New Yorkers.

Next week, the group will take its first formal step toward realizing this dream. On that day, a panel of artists and critics commissioned by the

Todd Fine, a doctoral student in history at the CUNY-Graduate Center and director of the Washington Street Historical Society, was first drawn to Washington Street by its depiction in The Book of Khalid, a novel by the Lebanese-American author Ameen Rihani, who lived in the neighborhood. 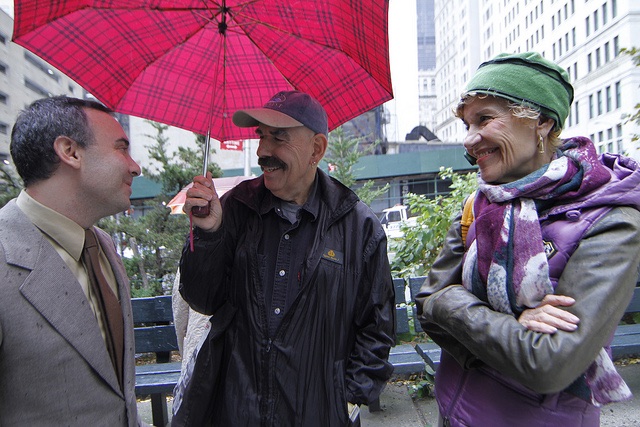 Fine felt that a monument would serve as an essential antidote to the city's amnesia about Little Syria, and raise awareness about the history of New York's Arab-American community. "The story of Arabs in America, and their role in New York City specifically, has been sorely overlooked," he said.

Syrians first arrived in New York in the 1880s, settling in the tenement-lined blocks north of the Battery, around Washington Street. Over time, the area was given the moniker "Little Syria." (What was then Ottoman Syria encompasses much of modern day Syria, Lebanon, Israel, and Palestine.) By the turn of the century, 3,000 Syrians lived on Washington Street.

A NY Times reporter who visited the neighborhood in 1903 described (in retrospect, not so sensitively) the "dark-eyed, olive skinned men" populating shops and cafes, admiring the locals' "uniform politeness" and "Oriental dishes, fearfully and wonderfully made." The reporter also remarked on the neighborhood's vibrant musical and poetic performances, which he described as “as quaintly Oriental as though he had just stepped out of Arabian Nights."

The cultural life of Little Syria was rich and the neighborhood had a thriving literary community. Rihani and Khalil Gibran—whose poetry collection The Prophet is thought to be one of the best-selling books of the 20th century—are the most famous writers to come out of Little Syria, but the feminist journalist 'Afifa Karam, the poet Elia Abu Madi, and many more called the neighborhood home.

Yet as Fine noted, while Gibran, and to a lesser extent Rihani, are still read, they're not remembered as New York writers.

Hani Bawardi, professor of history at the University of Michigan-Dearborn and the author of the book The Making of Arab Americans, joined Fine's effort because he believes New Yorkers should know—and take pride in—the writers of Little Syria. "I'm interested in writing them into the immigrant story of New York City," said Bawardi. "While they wrote mostly in Arabic, they cherished and described their daily life on Washington Street, and they left a trail of literature that gives us a glimpse into the history of the Lower West Side."

The words of these writers offer a glimpse into the city's past, but they are also prescient today, amidst continuing anti-Arab and anti-Muslim rhetoric in the U.S. The Little Syria community was deeply hopeful about life for Arab-Americans and relations between America and the Arab world. They saw themselves as part of both worlds, said Fine, offering a message of "religious tolerance, connection, and harmony with nature."

In The Book of Khalid, Rihani writes of the two worlds to which he belonged: "I care not for the freedom which does not free both; I seek not the welfare of the one without the other."

Over the years, the Little Syria community produced dozens of newspapers and periodicals. Much was written against colonialism and for democratic reform in the Arab world. "In many ways, it was Arab nationalism in its purest form," said Fine, noting that with the decline of the Ottoman Empire, "many felt they were nearing a new, peaceful society in the Middle East."

The artistic output of Little Syria is particularly important to historians like Fine and Bawardi because so little of the neighborhood’s physical history remains. The majority of Little Syria’s residents were evicted en masse in the 1940s to create room for Robert Moses' Brooklyn-Battery Tunnel. (Many settled along Atlantic Avenue and later in Bay Ridge neighborhoods.) The rest of Little Syria was destroyed in subsequent construction booms. 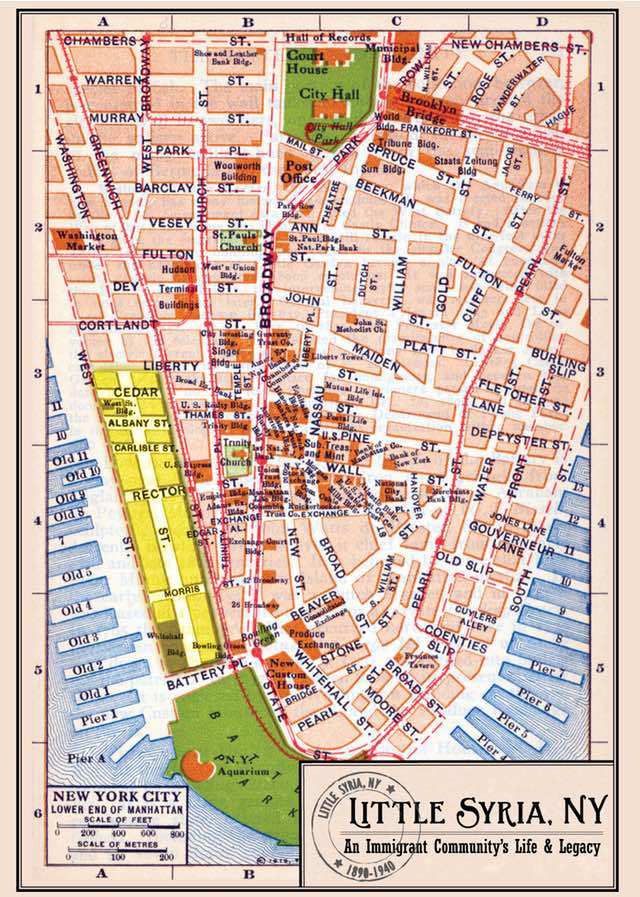 Map of Lower Manhattan, with Little Syria in yellow. The image edited by the Arab American National Museum and is part of a traveling exhibit about Little Syria, coming to NYC on October 1st.

Fine joined Svehlak in a separate campaign to win landmark status for Little Syria's few remaining structures. Despite this modest victory, however, they worried that the neighborhood's legacy was still invisible to most New Yorkers.

At first, the group was unsure of how to reintroduce the neighborhood to its immigrant past. They toyed with the idea of building a monument near Washington Street but felt this goal might be unrealistic.

Then, on a chilly November evening in 2010, Svehlak and Fine wandered over to the plaza on Trinity Place. "Joe told me the park was set to be renovated and expanded," recalled Fine. The plaza is adjacent to the former location of Little Syria, and seemed like an ideal site for a memorial. The two men were inspired. "We thought this could be our chance," said Fine.

Neither Fine nor Svehlak are of Arab descent, and they sought to enlist support for the project from New York's Arab-American community. To their surprise, many expressed reluctance at first. "It seemed some people were hesitant about drawing attention to themselves.” Recent controversies like the xenophobic furor unleashed by plans to build the Park 51 Mosque have left many New Yorkers of Arab descent wary. (I'm the daughter of a Palestinian immigrant and I've worked with and reported on New York's Arab-American community—these fears are very real.)

Bawardi also came to the U.S. from Palestine and he describes the sense of marginalization experienced by many Arab-Americans. It's estimated that more than 3.5 million Americans claim Arab descent, yet, as Bawardi pointed out, “It seems that few Americans recognize us as a part of the fabric of this nation." This sense of alienation is one of the main issues Fine and his colleagues hope to challenge with their art, and with time more Arab-Americans have caught on to their vision.

"I give Todd a lot of credit for galvanizing a community around Little Syria's history," says Bob Madey, who serves on the board of the Washington Street Historical Society. Madey is the grandson of Elia Abu Madi and he hopes the Elizabeth Berger Plaza project will revive the legacy of people like his grandfather. "They saw themselves as a bridge between East and West," he said. "I think they can be a bridge again today."

For several years, the Washington Street Historical Society struggled to gain traction with the city. At one point, officials from the Parks Department said a stand-alone installation would be impossible. 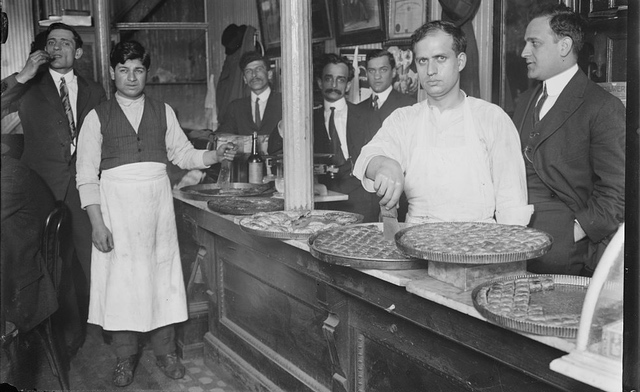 Pastry counter at a restaurant in Little Syria, circa 1910-1915. Photo courtesy of the Library of Congress

Still, advocates of the proposal felt they had a strong case for a permanent art installation. After all, Fine said, of the 81 public monuments in New York City dedicated to specific ethnicities, there are none recognizing Arab-American heritage or culture.

When the process appeared stalled, the historical society considered hiring an attorney to help; ultimately the group appealed to City Hall. The mayor’s Community Affairs Unit referred the proposal to New York’s public art program, Percent for Art, to see the project forward, voicing its support for the group's efforts to commemorate Little Syria and noting that the embrace of immigrant communities is "a tremendous source of strength for our city."

The formal process is set to begin at a hearing on August 8th, when a panel of judges arranged by Percent for Art will select five finalists from a pool of approximately 50 would-be designers—many of Arab descent. The winner will be selected by the panel several months later at a public meeting.

Five years after the project began, Fine feels the matter is now largely out of his hands. "We have to trust the process now," he said. “It's up to the community and the city to decide how they want to commemorate this history."

He does, however, have his own ideas of what the monument should entail, remarking that he hopes the winning artist is able to capture the spirit of unity and "universal love" embodied by Little Syria's writers.

#little syria
#lower west side
#longform
#original
Do you know the scoop? Comment below or Send us a Tip