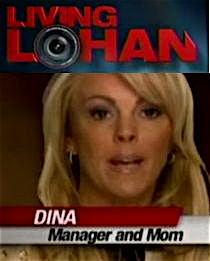 As surely some of the Lohan clan help declare open season in the Hamptons over Memorial Day weekend, the show "Living Lohan" will premiere on the E! network. The NY Post takes a look at the latest reality television family, and the momager who turned even more cameras on her fam: Dina Lohan.

Though there's a voice of reason in the house provided by "Nana" Lohan, expect a lot of on-screen drama; from Dina scanning the tabloids and blogs -- trying to control rumor-mongering, to watching alleged sex tapes that may or may not star her eldest, Lindsay. The Lohan's despise the attention as much as they thrive on it, or at least that's what Dina, who says she's "like a lion with her cubs," wants you to believe.

The show is allegedly going to focus on how Mommy Dearest raises her 11-year-old son Cody while molding 14-year-old Ali into the latest and greatest version of Lindsay (who reportedly won't appear on the show). The first episode mainly takes place at the family's North Merrick, Long Island home, and focuses on Dina helping young Ali hone her musical career. The limelight-starved Lohan warns, "I've been following Lindsay's footsteps since I was very young," as her mother claims if the tabloids take aim at Ali like they do her sister, "there's going to be war."

Watch the latest Lohan trainwreck crash and burn right before your very eyes starting this weekend! For now, catch an extended clip of the show here.