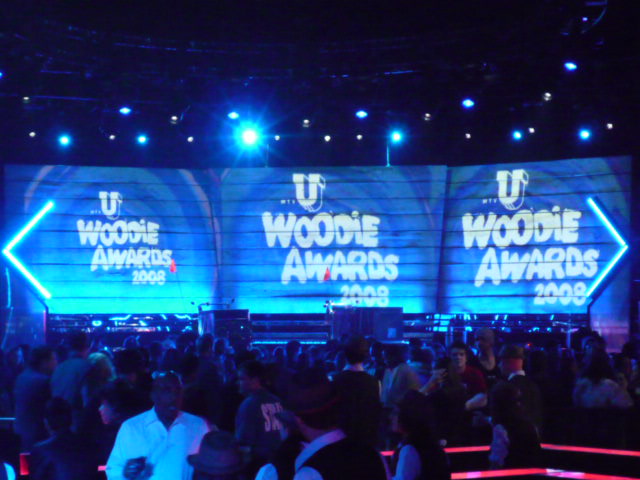 We are once again liveblogging the MTVU Woodies! In person! Now, before you scamper to the remote and try to follow along, the show (which has something to do with college kids and that crazy music they listen to in their iPod devices) doesn't actually air until next Wednesday. So please read now, then come back next week so that all the jokes make sense. We promise they might. It's cold in here and they're being stingy with the drink tix, but the lineup is pretty rad. Vampire Weekend, Santogold and a whole bunch more. It's an event!

10:18: Ok, looks like they're wrapping it up. Thanks everyone for following along to this entirely relevant event. It'll all make sense next week. You'll see. Goodnight!

10:06:Solid performance of "Kids Don't Stand a Chance" with Chromeo on Vocoder. Cool idea. They pulled it off.

10:02: All American Rejects to announce Woodie of the Year. The winner is...Paramore! As announced written on Tyson's bare chest. Classy. But a well deserved win. Those guys rule.

9:58: It appears they're setting up for the Vampire Weekend/Chromeo mega-finale, which admittedly has the potential of being quite rad.

9:47: Jack's Mannequin just won a community service award. Good for him. Nothing bad to say about that.

9:39: Not gonna lie...listening to this makes us want a Bud Light Lime. Success, marketing department!

9:36: Debbie Harry is here to introduce Santogold. Finally getting to the point in the evening where Gothamist has heard of the bands. Santi, as she apparently goes by now, kinda rules. Sounds great, crowd seems into it.

9:25: Breaking Woodie Award...All Time Low (literally), Lykke Li, There for Tomorrow, Tyga and We the Kings. The winner is All Time Low. Lamest. Seem like nice enough guys accepting the award, but nobody seems to care.

9:19: This is the sort of band that brings out a bunch of scantily clad cheerleader types for no real reason to get the crowd excited. And that's just what they did. Kind of depressing, really. This is like a lame high school fantasy? It's just out of place. Emo and cheerleaders just don't mix.

9:11: College band award. Moby presenting. A bunch of kids are about to get their 15 minutes. The winner is...The Bride Wore Black! Have a listen, they seem pretty excited about this. They're from NYU and the video they showed was them playing Rock Band. Well done, boys.

9:08: The Video DJ plopped a Rick Roll into Britney's Womanizer video on the big screen. The crowd let out a collective sigh. That meme died nearly a year ago, no? C'mon now.

9:04: Kelly, sitting up here in the blogger cage, reports that there was just a girl fight in the ladies bathroom. Despite manning the official Gothamist camera for the night, there are no pix. Lame.

8:59: Being a college radio celebration of sorts, they're giving out an award for college radio Woodie. WICB Ithaca wins. They're here, all decked out in goofy suits and purple tuxes.

8:52: Kid Sister and A-Trak to present the Left Field Woodie...Chromeo (who seem to be a crowd fav), Cool Kids, No Age, She and Him and Yelle. Winner is...Chromeo!

8:46: Lykke was covering a Tribe Called Quest Song (Can I Kick It?), which was pretty weird until Q-Tip came out and joined her! Now it's cool AND weird! They seem to get along pretty well. Q is now doing his own set. Lots of performances for an awards show. Not complaining.

8:39: Breaking news! Boys like Girls are total dicks to Stereogum! Some guy in the band waved his gum (get it?) in Amrit's face on the red carpet. Seems they are attempting to defend Jared Leto's honor from 2 years ago. The emo fraternity takes these feuds seriously.

8:34: Can't understand a word anyone is saying, but We've got a GREAT view of the teleprompter, so that helps. Lykke Ki is on now. The crowd seems less into her than a mere appearance from Motion City Soundtrack. But she's giving it her all, darn it. And this crowd will scream their face off for anything.

8:32: A break in the action. Amrit from Stereogum stopped by! And Michelle Collins and Sarah Schaffer from Best Week Ever. They us brought booze, thank god.

8:27: Atmosphere won best performer Woodie, which appears to be for best live show. Must admit, he puts on one of the most engaging hip-hop shows. Well deserved.

8:24: MCS's hair is down, which is a new look. We promise not to blog exclusively about hair and headwear tonight, PS.

8:22: Best New Woodie! Eryakh Badu is new? OH best VIDEO Woodie. Thought these were all video awards? Already lost. These kids just move too fast. The winner is...Motion City Soundtrack, who are just about the only emoish band nominated for anything. Guess they couldn't go completely indie this year.

8:20: Hayley and some other guy from Paramore are now on stage. Not sure what is being presented. Hayley has a funky new haircut. She has clearly progressed beyond the spunky girl next door phase into something far more fancy and famous. Not holding it against her.

8:18: He threw it over to the Cool Kids, who are joined by about 200 randoms on stage. Roth joins them eventually. Kind of like this guy. Cool Kids are always fun.

8:14: Asher Roth kicks off with an adorable Elmer Fudd hat and a matching Maryland Terps sweatshirt and basketball shorts. Nothing too formal. Who is he? See here. Doesn't look like he's got a wikipedia page yet.

8:06: Looks like they're running a bit late, which is pretty odd considering these things usually run like old fashioned trains. Joining us on in the blogger cage is The Source Mag amongst a couple others. Ooh, lights out! Here we go.

7:58: Should mention that the set looks very nice. It always does at these things. Makes the normally hideous Roseland seem like a pretty spiffy spot. Should get going any minute now...

7:50 A-Trak has been warming up the crowd with well mixed but incredibly loud music for the last 45 minutes. Lots of standing around and confusion amongst the attendees, which is pretty par for the course as these things go. All the bartenders and wait staff are dressed like Britney that time on the VMAs where she took all her clothes off. A-Trak has the same K-Fed hat on as all of them. Awkward!

#liveblogging
#mtvu
#Woodies
Do you know the scoop? Comment below or Send us a Tip