Ryan Eggold's carved out some space for himself in the television world—he's starred in The Blacklist and 90210, and has popped up on a slew of other shows, like Veronica Mars, Sons of Liberty, and Gossip Girl. Now, he's taking a chance behind the camera—he wrote, directed and produced the romantic comedy Literally, Right Before Aaron, which stars Justin Long as a lovelorn, lost twenty-something who (misguidedly) decides to crash his recent ex's (Cobie Smulders) wedding.

The film, which boasts cameos from everyone from Peter Gallagher to Kristen Schaal to Luis Guzman, premiered at the Tribeca Film Festival and is currently enjoying a limited release in theaters. We spoke with Eggold to find out a little about how heartbreak drives creativity, getting behind the camera for the first time, and what it was like working with such an amazing cast.

What made you decide to jump from acting to directing, writing and producing?
You know, it’s hard to say, I think it was writing more than anything. It was fairly unconscious, in the sense that I was going through a breakup and having certain thoughts and feelings and terrors about marriage and things like that. I wrote a scene, which became a few scenes, which became a short, which I [thought], "Why don’t we shoot this?" Because I know so many folks and was interested in creating something in addition to just being an actor, and being part of telling somebody else’s story.

So we made this short film, and people really responded to it. People who watched it told me that they had similar experiences in their own life, or could relate to it, or had said the same thing or felt the same thing or thought the same thing [as the characters]. It was really powerful for me to realize that something that you can think in your own mind, or feel, can translate and be universal, or is something that a lot of other people might be thinking and feeling. I wanted to tell the feature-length version of the story, and so [I] went for it.

Is the film based on a true story, or was it your way of creatively channeling your own breakup pain?
It is based on things that have been said and felt. It’s not truly autobiographical. I didn’t go to her wedding or anything, but it is very much inspired by what was happening at the moment.

Are we supposed to identify with Adam, the protagonist? He's a very complicated character. It’s hard to tell whether he’s a good guy, he’s a lost guy, or he’s just in pain.
I think he’s a lost guy, and I think he’s a stuck guy. I think that his biggest problem is that he hasn’t really taken charge of his own life, and he’s not moving forward in the way that he should be. He’s just sort of stuck in this place. It’s not that he’s sitting there hung up on this girl, but I think once this girl calls, and she’s getting married, and this whole thing happens, I think it becomes a catalyst for that discovery. And I think he pins, falsely, everything on, "This is what I need, this is what I have to do to make everything right, this is going to put everything on track."

And so he falls in love with the nostalgia, the idea of this person, as opposed to acknowledging the truth of the situation. But that’s what it’s about. It’s about being stuck, and it’s about what it takes to become unstuck. And it’s about what it takes to accept things and move forward and that kind of stuff. There was a different ending on there originally that really drove that home, that we ended up getting rid of because it was just too much—I won't give away the real ending for anyone who hasn't seen it—but it basically was about traveling all over the world.

Is it a good idea or a bad idea to go to your recent ex’s wedding?
It’s totally personal. My thoughts would be, a bad idea. But then again, I know a lot of people who’ve done it and there are people in my life whose I would go to and would be very genuinely supportive. I think it just depends on—in this writing, I tried to make it one-sided and explore this idea of The One, and what if somebody was The One for someone, but not the other way around, and things like that. If you see this movie, you’ll think it’s a horrible idea.

What are some challenges that you had with directing?
As it was my first time, I was learning so many things all the time. I’ve been on a lot of sets, and I’ve been around a lot of directors, and I’ve been working for many years now, but stepping in the shoes of being the decision maker, and the guy that everybody is relying on at some point, yeah, it was challenging for sure. One thing is that you’re responsible for a large group of people. At the end of the day you're the captain of this ship.

That’s something that I didn’t consider, that you are in charge this giant group of folks and production. There’s a certain naiveté that I had, that I'd be free to just translate my imagination freely and do my work. It’s a very social job, and it’s a very collaborative job, so you have to work with a lot of folks all the time, to together try to create this thing. 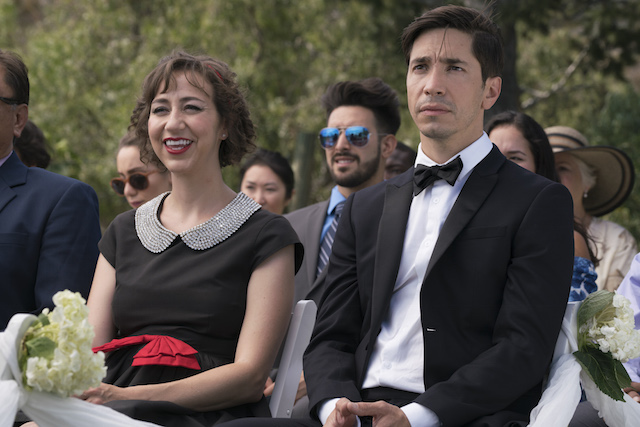 You have a really amazing cast. Everyone is in this film. People just keep popping up. How did you get everybody together?
Hopefully it had something to do with the script, that people liked the material and wanted to play these parts. I ran into Justin at a film festival right when I finished the script and talked to him about it. He read it and then told me what he liked about it and what he responded to and how he could connect to it. That was something that I got from a lot of the cast, that they’d either experienced something similar, or their ex had come to their wedding, or some different version that was helpful.

So everyone was able to connect to that universal experience of going through a breakup.
Yeah. The universal, sort of, “what if,” and contemplation in that messy afterwards, and nostalgia. And whether we fall in love with a specific person or idea.

There were a lot of characters in the film, it’s not very long and most of the focus is on Allison and Adam. The secondary characters tend to pop up for very short periods of time and then disappear. Was it hard to find room to fit everybody, and flush the characters out?
It's an ensemble cast and an ensemble film, and everybody came in to play these parts that do sort of pop in and pop out around this story that Justin is in with Colbie. It honestly was great, because we didn’t have to take up a lot of people’s time to get them involved. Sometimes it would take just a few days, which as an actor I know can be very helpful, especially if you’re working on different things. It would keep the energy fresh. You’re there one day, half day with Dana Delaney and a half day with Luis Guzman. You know, working with all these brilliant comics, all these great actors and actresses, it was so fun to get fresh energy and new folks. That’s what made it exciting and interesting.

Did you use any of the skills you’ve picked up through acting work to create the script?
I think so. I think it’s fairly unconscious in the sense that you—I never studied writing specifically but I did read a thousand plays. I have read a thousand screenplays, and I have acted in a handful of them, and I have felt when it feels good, the writing, and it feels natural, and feels funny or sad or honest or whatever it may be. You connect. And I felt when it feels like writing, when it feels stale, or when it feels artificial or forced, or too theatrical or whatever. And so I think we’ve tried to apply that. Of course, I’m still learning. I’m still writing and I’m getting better at it all the time, but yes, I think that reading and interpreting and playing scripts is really my only reference point for writing.

Which of the secondary characters is your favorite?
Kristen Schaal playing Tallulah is absolutely hilarious, and human, and I feel so much empathy for her, but she’s also ridiculous. She’s just really great at riding the line between absurdity and earnestness. And she’s great. Uf she would improvise she would really improvise within the script, within the story, with something similar to the lines. She was really good at keeping the scene on track.

Was there a lot of improvisation?
There was a fair amount, yeah. But it’s funny. I really learned by the end, a lot about how to do it. For this kind of film, for a comedy, a little bit [of improvisation] is great and a lot is a disaster. If you’re going to shoot a script you’ve got to shoot the script. You’ve worked on it for a reason and people said yes to it for a reason. You’ve got to try to capture that, what you originally intended, and throwing in an additional joke or surprising an actor within the moment, things like that are fantastic and really help make it real and grounded and keep the impulses alive, keep it honest and surprising.

Are you working on any new scripts?
I am. I’m working on a script right now. I won’t say too much about it yet, but it’s funny, I’ve got a few scripts going and some are very different from this film, but the one that I’m leaning towards the most now is about relationships. And love, and all that stuff. I might be obsessed with it.