Voices of New York is an ongoing series with the 92nd Street Y that gives Gothamist access to previously unreleased recordings from 92Y’s vast archive of talks, featuring the movers and shakers who’ve shaped the city. This is our second installment, featuring Irving Howe, prominent figure of the Democratic Socialists of America. Previously: Jimmy Breslin. 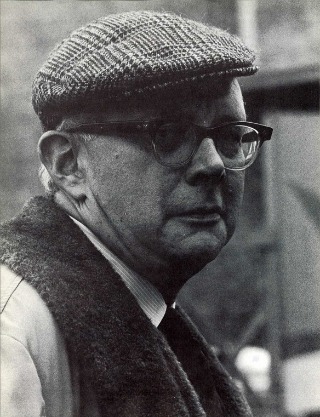 In a 1968 essay in Dissent magazine, the magazine's founding editor Irving Howe coined the term "New York intellectuals" to describe the group of left-wing, mostly Jewish writers and thinkers living in the city around the middle of the 20th century. The group counted Susan Sontag, Hannah Arendt, and Norman Podhoretz among its illustrious membership, but it was the lesser-known Howe who both defined this group and perhaps best embodied its "loose cultural-political tendency." Following his death in 1993, the New Yorker described Howe as "the most energetic, the hardest-working, arguably the most independent and idealistic, certainly the most authentic" of the New York intellectuals.

Today, Howe is probably best remembered as one of the leading champions of the nascent democratic socialist movement, an anti-capitalist group that has gained national momentum since the election of President Trump. But he was also an eminent literary critic, an editor of Yiddish novels, and a historian of Jewish life. His National Book Award-winning World of Our Fathers is widely considered the best chronicle of the lives of Eastern European Jews who immigrated to New York in the late 19th and early 20th century. In 1976, just a few months after the book came out, Howe read from and discussed the work at the 92nd Street Y. As part of our ongoing series with 92Y, we've included that previously unreleased recording below:

Howe begins the speech by examining the first wave of Jewish immigration in the 1880s. These were mostly unskilled adventurers and Russian military-dodgers, and according to Howe, "the most victimized of all the immigrants" whose "story has been virtually lost." The author references dozens of immigrant memoirs to retell the misery of life in the Jewish quarter of the Lower East Side, then the city's most densely packed area. As the new immigrants struggled to find work, prostitution flourished on Rivington and Allen Streets and Jewish gangs regularly attacked zealous missionaries—contributing to the reputation of Jews as a major source of "crime and social pathology."

The makeup of this population changed at the turn of the century, Howe notes, with the arrival of a new Jewish intelligentsia. While the first wave of immigrants had sought to ditch their former lives and traditions, this second wave tended to be better off, and brought with them a different sort of relationship to the home countries. In the early 20th century, they were known to stroll down East Broadway, the main boulevard of the Jewish quarter, discussing radical politics and literature in Russian, considered a far more cultivated language than Yiddish.

Ultimately, Howe argues, this overlap between the two waves of immigrants helped create a cultural and political connection that underpinned Jewish life in New York for decades to come. His 92Y retelling—delivered with laryngitis, because he'd just been to California, "which [he] strongly recommend nobody do"—is an eye-opening account of the immigrant tradition from which Howe, and so many other influential New Yorkers, sprung.