Listen: David Copperfield Gives a Tour of the "Summer of Magic" Exhibit At NYHS

Los Angeles may have The Magic Castle, but New York is one of the historic centers of the magic entertainment industry. We have Tannen’s, a magic shop which has been around since 1925, and The Conjuring Arts Research Center, which houses over 12,000 volumes devoted to magic. And of course, there's David Copperfield, who at age 16 was teaching an "Art of Magic" course at NYU.

Copperfield's first experience with magic was actually at the Macy's in Herald Square. A shy 8 year old, he was trying to be a ventriloquist -- but it wasn't going well. "I was really a bad, bad ventriloquist, but I thought -- it couldn't be me! It has to be the dummy!" He said, as he introduced the new "Summer of Magic" exhibit at the New-York Historical Society.

So his mom took him to Macy's, where the dummys shared space with magic tricks. A man named Danny demonstrated a small, wooden board that seemed to make coins disappear -- and from then on, Copperfield was hooked. "I fell in love with magic," he said.

The exhibit, running through September, features fantastic artifacts from Copperfield’s own collection -- including that first trick, a square board with grooves like a checkerboard.

Listen as David Copperfield gives Jennifer Vanasco a tour of the New-York Historical Society exhibit in this WNYC story.

Copperfield may be best remembered by New York audiences not for his niche 1970s NYU course, but for that time in 1983 when he made the Statue of Liberty disappear (as seen on The Americans). At the time he had explained that he wanted to show "how precious liberty is and how easily it can be lost," noting that he could "show with magic how we take our freedom for granted." To get the monumental task done, he says he "asked our government for permission to make the Statue of Liberty disappear, just for a few minutes." And voila:

One of Copperfield's secrets was revealed during the course of a lawsuit earlier this year, but don’t expect this exhibit to reveal any tricks of the trade. Instead, it is a collection of artifacts from the Golden Age of Magic (1880s-1930s). The press release notes they'll be offering "a historical perspective to the spectacle of magic and the magicians who became famous performing death-defying feats."

The artifacts on display include items once owned by New York’s most famous magician, Harlem resident Harry Houdini, and are now part of Copperfield’s personal collection. There’s the trunk for the “Metamorphosis” trick, which astonished audiences at the time, and a pair of handcuffs he used in what was considered his toughest escape (it took him over an hour to get free!). There’s also a dress likely worn by Adelaide Herrmann, the “Queen of Magic,” who performed a bullet-catch, and props belonging to the mind-reader Alexander the Man Who Knows. 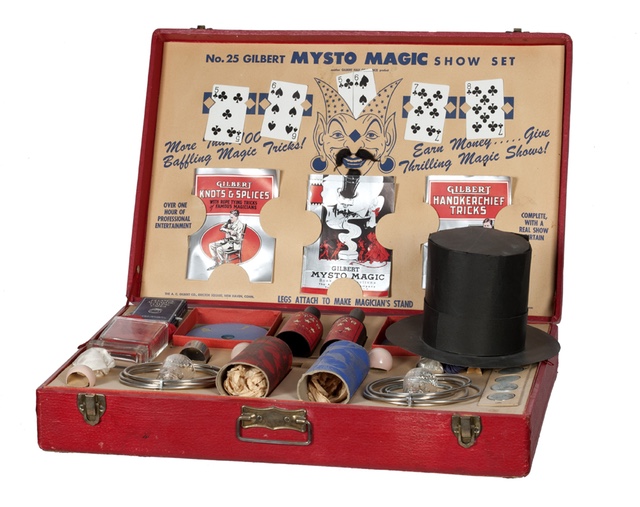 The exhibit is only part of the museum’s offerings. There are films, workshops and weekend family activities that include appearances by “Living Historians” playing historical magicians, fortune-tellers and escape artists. Saturday night, there’s “An Evening with David Copperfield” as part of the museum’s speaker series. Tickets are still available.

Jennifer Vanasco edits and reports on the arts and the economics of culture for WNYC/Gothamist. Awards include the New York Radio Festivals Silver Award, the National Lesbian & Gay Journalists Association Excellence in Radio Award, the National Headline Club Award and AP's Best Use of Sound. She is an adjunct Assistant Professor at Columbia University