Lin-Manuel Miranda, In the Heights 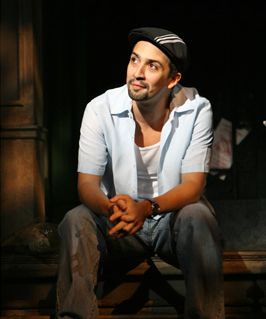 They’ll deny it, but most college students who write plays harbor some secret fantastic hope that their new opus will be hailed as the arrival of a fresh new voice and open on Broadway to triumphant acclaim. It obviously never happens, except when it does: 28-year-old Lin-Manuel Miranda, originally from Washington Heights, conceived the musical In the Heights as a sophomore at Wesleyan. After graduating, the show, a hip hop and salsa-inflected homage to his old ‘hood, caught the eye of the producers behind RENT and Avenue Q. It opened Off Broadway last year to rave reviews, packed houses and far too many awards to schlep home on the A train. Now the Broadway incarnation is bounding through previews, having kept most of the original Off Broadway cast, which includes Miranda himself in one of the starring roles. The official opening night is March 9th; ticket prices vary.

What’s the best feedback you’ve heard from an audience member? Dr. Ruth came to the show; she’s a longtime Washington Heights resident. I think she lives in the 190s. And she loved it. A friend of mine knows her and Dr. Ruth said to her, “Have you seen In the Heights? It’s even better than sex!”

Was there a specific moment of inspiration for In the Heights? There were a couple. The first song I wrote is called “Never Give Your Heart Away.” It came out of a conversation with a Latino friend of mine. At the time I was in a long term relationship and my friend was sort of your classic player. And he was telling me what his mom told him as a kid: "Never let a woman play you; play them first!" And I remember thinking about what a fucked up life lesson that is. I wrote that song on the subway from West 4th Street, riding back to my home on 200th Street, imagining a mother imparting that lesson to her son. That character ended up becoming Benny. At the time I had been toying with the idea of writing a full length musical and I kept doodling the words In the Heights over and over in my astronomy notebook in school.

Often when shows transfer to Broadway the original cast gets replaced with bigger names. That didn’t really happen here; was it something you had to fight for? No, we were very happy with our original cast. And I was part of that original cast so I knew what was working and what wasn’t and we felt we had the right people to tell the story. We have added people more people to the cast going into Broadway, which is something our producers insisted on. You don’t often hear producers say, “We want to hire more actors!” But it felt necessary to fill up the bigger space.

Are you worried about inheriting the curse of Capeman, the last musical with Latino characters that bombed on Broadway? I don’t know if Capeman is a curse or a very strange anomaly. I think Capeman had a gorgeous score but I’m not sure what the show was and I’m not sure they knew what the show was either. I saw it my senior year in high school. If I made a list of my musical heroes Ruben Blades, Marc Anthony and Paul Simon would all be on it. I went into it thinking it would be the greatest show ever made! And when it got the critical beating it did, I was really crushed. I saw it three times in previews.

There’s a great story about Stephen Sondheim working as an assistant to Oscar Hammerstein on Allegro, one of his only flops. Huge failure. It broke Sondheim’s heart to see that and he said, “I think that when I started my career I was just trying to fix Allegro.” I think when I started writing In the Heights, two years after Capeman closed, I was trying to fix Capeman. One of the questions was: Can we have a Latino show that isn’t about gangsters in the ‘50s. And can we have a Latino show that can represent our culture in an honest way on stage? I think Paul Simon did that job musically but there hasn’t really been a successful attempt at it in contemporary Latino culture.

What changes have been made in the transition from Off Broadway to Broadway? There are four new songs in Act Two and significant book revisions throughout. I learned a lot Off Broadway because I was onstage every night. And when I got to see the show I realized that we went really quickly through Act Two; it turned into a montage of what was happening instead of actually unfolding. All the new songs are in Act II and they’re intended to finish the storylines we started in a satisfying way.

Having worked on the show for so many years, aren’t you a little tired of it by now? No, I’ve never felt done with the show. I assume it will be done when Equity tells me I can’t change lyrics anymore. Though Sondheim was still tweaking Sweeney Todd when it was ready to be made into a movie. I always feel like there’s more work to do and it will be a question of when they pull it from my hand. That’s not to say I’m not excited about the next thing.

What would you like to do for your next project? I don’t want to jump into another original musical right away. I’d like to work with some of my musical heroes I’ve been able to meet because of this, people like Stephen Shwartz and John Kander. I’d like to pick these guys’ brains. This is my first show and I have a lot to learn. I’ll start talking to these guys after we open and see what’s next. But I’m enjoying this as much as I can because I can’t believe it’s gotten this far.

Have you been approached to do a movie version, ala RENT? Not directly. I’ve heard there’s interest in that, which is great, but it would have to be someone special. We have a lot of great Latino filmmakers out there, as last year’s Oscars will attest.

Anything interesting to report from the rehearsals? The first day we rehearsed on the Rogers stage was pretty intimidating. I’m talking to you now from what was Joel Grey’s dressing room, sitting in the little bed they built for him when he was doing Chicago in 1975. The first thing that happened when we rehearsed here for the first time was my voice cracked so hard on the first line that everyone started laughing and we realized we were human again.

Do you reside in Washington Heights? I don’t, actually. I was living in Inwood after school and last April lease expired and the rent went up so precipitously that I said, “For this, I will live in midtown.” I live closer to the theater now but my dream is to be able to buy a place in Washington Heights. Hopefully it won’t be too unaffordable once I save up the money to do that.

What are some of your favorite restaurants around Washington Heights? There’s an amazing wine and cheese place on 170th or 171st called In Vino Veritas. This couple owns the place and they’ve got an amazing wine selection. There is the New Leaf Café that I believe Bette Midler owns a piece of. You take the train to 190th street and walk into Fort Tryon park and the restaurant is in the middle of the park. And of course there’s Caridad, which is practically the McDonald’s of northern Manhattan.

If you could change one thing about New York what would it be? I can’t live anywhere else but I think one of the things that makes New York special is that it’s always been home to people of varied socioeconomic backgrounds and that as it gets more expensive it will increasingly become exclusively a playground for the rich. It’s important that New York remains affordable for all New Yorkers.

Can you share an experience you've had that stands in your mind out as a classic New York moment? When I was writing the first draft of In the Heights during my winter break I would go for walks when I got stuck for inspiration I would take a walk around. I think I was on 181st Street walking around. I always tell people Washington Heights is full of music and they sort of think it’s just a line I use to plug the show. But I swear to God when I was writing the first draft I was walking around and I saw a Chinese delivery guy riding his bike with a boom box strapped to the front of his bike. It wasn’t a little radio; it was a two speaker boom box blasting music. It was like Pimp My Ride but with a two wheeler. I always thought that was a classic New York thing: Of course the Chinese delivery guy has got a subwoofer on his bike!