For decades, artist James Turrell has been synonymous with disintegrating the boundaries between space and light, especially within his Skyspace installations peppered throughout the world. Turrell's New York-based Skyspace installation, titled Meeting, is permanently housed inside of MoMA PS1 in Long Island City—the first of his in the United States, it has been there since 1980. There you come face to face with a rectangular hole in the ceiling, an unobstructed aperture revealing a sublime slice of sky. It's framed by undulating LED lights, changing in tune with the evening sun's movements; the sky, and everything around you, appears to shift optically. We don't need to tell you how rare it is to find this space, and a brief moment to breathe, in the city.

Which is why we were disappointed when we received a tip from one of our readers, who had recently visited PS1 and noticed something creeping into Meeting. The obstruction, pictured in the photograph above, seems to be protruding from the gargantuan high-rises going up across the street from PS1, at 22-44 Jackson Avenue. These two residential buildings, which replaced the former legendary graffiti haven 5Pointz, are also called 5Pointz and will house 1,115 units total (including 223 affordable housing units) when they're finished.

"What specifically is currently visible as scaffolding... will not be visible when the building is complete," says Molly Kurzius, the Director of Marketing and Communications at MoMA PS1, noting that the museum has informed the artist about it. At press time, Turrell's team didn't reply to a request for comment.

The possibility of tall buildings encroaching into Meeting wasn't likely on Turrell's mind when he first started building it, says Craig Adcock, a professor of art history at the University of Iowa and who wrote the book James Turrell: The Art of Light and Space.

"It might have been a distant worry," Adcock says. "Of course, having a high-rise visible there through the ceiling and aperture will ruin it. It won't work properly if there's a building with lights up that's visible."

This raises questions about whether museums consider neighboring air rights when installing a work that demands clear and full view, particularly in hyper-developing areas. The acquisition of air rights is one way that developers can construct lofty buildings on seemingly-small lots (and can go for astronomical prices).

Kurzius says that since the PS1 building occupies practically the entire block, "the air rights are not specifically something we've looked into or can speak to in an informed way."

In MoMA's oral history series, Turrell said that he lived in a tent under an open roof while he worked on Meeting, using a sizable chunk of his own money to complete it in 1986. The name is a reference to his Quaker roots, and "the idea of the meeting of the space inside to the space in the sky, and feeling that juncture, having it be a visceral, almost physical, feeling, as though there were material or something there," as he noted. Several years ago he restored the piece, and reopened it again at PS1 in 2016. 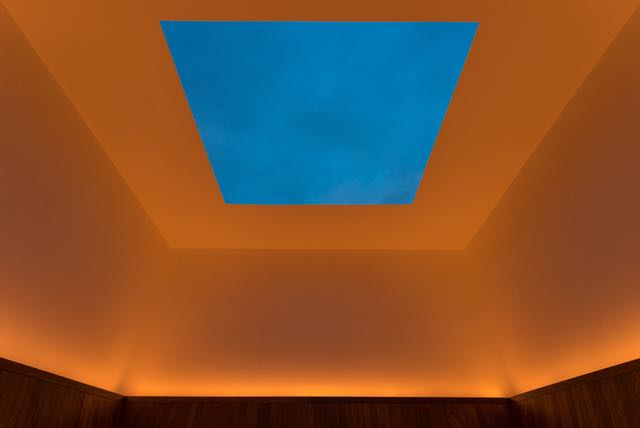 Adcock says that Meeting is one of the most successful and well-maintained public sculptures around, and it's clear why. The effect of sitting quietly in this space is extraordinary. "It does this very interesting sleight of hand that a lot of great art does," PS1 curator Peter Eleey told Abbi Jacobson, for WNYC Studios, in 2017. "It takes something out of the world so that we can focus on it. But in James's case it actually just uses the world as it is. He's not actually taking something and sticking it on the wall. He's cutting a hole in the wall so that we have access to this thing that we otherwise don't think about."

Inevitably, elements of the natural world, such as birds and clouds, come into contact with Turrell's Meeting. As do planes flying overhead. But the breakneck development of Long Island City, which has exploded in the past few years, isn't an intended part of that experience. The 2017 NYC Housing Production Snapshot revealed that Long Island City was the neighborhood with the fastest number of units completed that year (2800). The fact that it's the New York City neighborhood developing most briskly only stands to accelerate more with the impending arrival of Amazon's hotly-contested HQ2 facility.

Another one of Turrell's Skyspace installations, at the Nasher Sculpture Center in Dallas, Texas, had a similar issue several years back. In 2013, Hyperallergic reported that a luxury condo dubbed the Museum Tower became visible within Turrell's Skyspace there, entitled "Tending, (Blue)." A redesign in 2007 made the tower stand about twice as high as originally planned (it also seared trees in the sculpture garden). Turrell declared the work "destroyed," and created a new design for the space that wouldn't have the Museum Tower in view. Those plans have yet to come to fruition.

The gnarled role that artists and cultural institutions occupy in gentrification has been debated for decades, particularly in becoming unwitting engines of change in a neighborhood (A 2016 study published in Urban Studies, which looked at the relationship between artists, gentrification, and displacement, further entangles this idea). But art can often become attractive for developers looking to capitalize on culture—often after longtime residents have been pushed out of those areas due to exorbitant price hikes.

"At what point does the artwork become compromised by development that's attractive, because art becomes part of investment?" says Dr. Saskia Warren, a lecturer of cultural geography at the University of Manchester, and who has studied audience interactions with one of Turrell's Skyspaces in the U.K., at the Yorkshire Sculpture Park. "[Turrell] seems to be in quite a conflicted position where he wants his artwork to create a space apart from that, and actually it's doing the opposite." 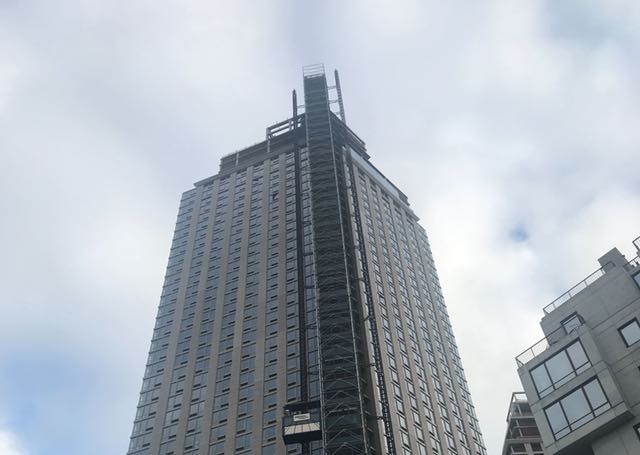 It's not a coincidence that the 5Pointz development's name cribs from the scrappy graffiti destination that was demolished to make room for it. Or the fact that the luxury condos right across the street from PS1 are named Galerie; the sign outside reads "artful living in LIC." Last year, a federal judge ruled that Jerry Wolkoff, a real estate developer, must pay $6.7 million dollars to artists whose work was lost when he had 5Pointz's walls whitewashed in 2013. "I love the idea of 5Pointz being there, as you know, because I love the idea of art," Wolkoff told Gothamist over the phone. "So we're going to be hopefully working with [PS1] hand in hand; and hopefully we're going to be there forever, and hopefully they're going to be there forever. And I'm a supporter of what they do." Wolkoff said that they're aiming to finish building the new residential towers by June of this year.

Hopefully, Meeting can still exist at PS1 in its seismic simplicity—even when the uncertain future rears its head at the bottom of the frame.