Artwork by Rene Smith as seen on Gossip Girl.

Last night as Gossip Girl returned to the airwaves, it brought some real LIC artists with it. In the fictional Bedford Avenue Gallery, as Blair plots to ruin Jenny Humphrey, she pauses in front of some pieces -- one of which belongs to LIC artist Rene Smith, who told us about how her art landed on Rufus Humphrey's walls. 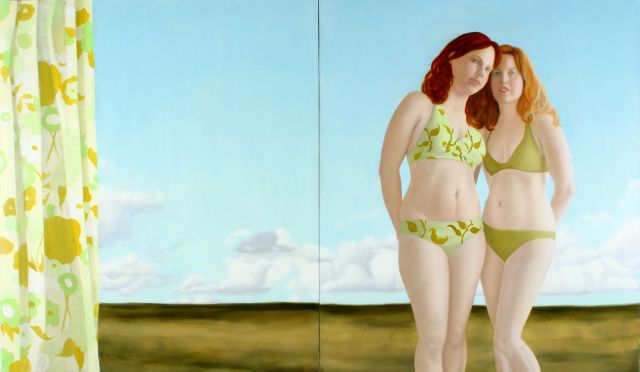 I heard that Gossip Girl rented art work for their "gallery" and I actually just stopped by Silvercup Studios, which is right across the street from my studio. The security guard was nice enough to let me in and I was able to show my portfolio to art department coordinator.

I dropped off my work before the writers strike, so I didn't hear back from them for awhile, and then I got a call that they wanted to pick up my work in a few days and use it for the season premiere.

They rented it from me - they said on other episodes when a character buys a piece on the show, they purchase the work from the artist in real life as well so it can remain on the set, but in my case I have the work back in my studio now.

The art department also gave Smith a tour of the set, which is "enormous," and introduced her to the producer, who was also interested in her work. In the end, Gossip Girl is staying hush hush about how much the painting rented for, but Smith said the amount "was very helpful in terms of supporting my new work."