Libraries Across The City Rally For Funding

Branches of the New York Public Library, the Brooklyn Public Library, and the Queens Library hosted rallies this morning and afternoon to raise awareness for the Invest in Libraries campaign. The campaign seeks to secure $65 million from the city in operational funding—which would go towards maintaining and expanding libraries' programming—as well as $1.4 billion in capital funding, which would be spent on vital renovations and infrastructure repairs. The campaign also hopes to restore $10 million in funding cut from the 2016 budget.

We stopped by the day of awareness at the Seward Park branch of the New York Public Library on the Lower East Side. George Mihaltses, Vice President of Government and Community affairs at NYPL, as well as Seward Park staff, spoke about the increasing need for government support as New York City libraries continue to transition from intellectual sanctuaries to crucial centers of education. 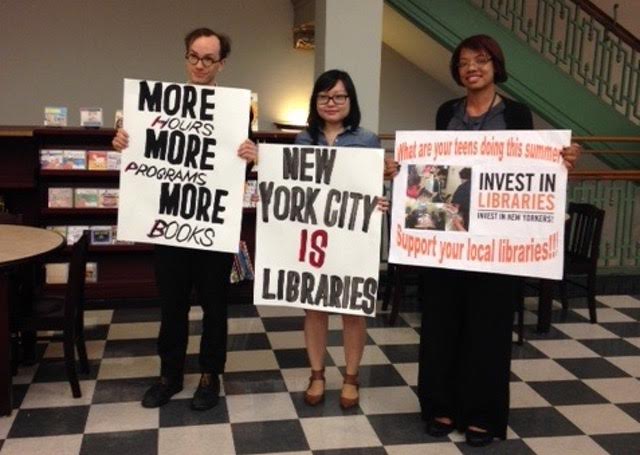 "Libraries are no longer a passive place," Mihaltses told us. "They're an active place. There are after school programs here, people learning how to read and write English, people learning how to use computers, how to code… there are all kinds of programs that are happening now that weren't happening in libraries years ago, so we have to [out]fit the building to physically fit those needs." He added that the "open spaces, and beautiful vast reading rooms" characteristic of the city's 67 original Carnegie libraries may be becoming obsolete.

When asked what Seward would do with the increased funding, Lakisha Brown, manager of the branch, said they'd use it for functioning elevators and new windows. She also hopes to be able to keep Seward's doors open 7 days a week, instead of the current 6, which would mean increased programming and additional staff.

"Seward Park is one of the best locations I've worked at," said Brown, who's worked at 6 libraries in Manhattan and the Bronx. "Our line sometimes goes out the door, with children taking out 30 books at a time."

UPDATE: A mayoral spokeswoman issued the following statement this evening: “The de Blasio administration has made an unprecedented investment in our city’s public libraries -- tripling capital commitments compared to the last Ten Year Strategy, while increasing and baselining operating funds. We also continue to work in close partnership with library leadership on major citywide initiatives, including IDNYC, universal pre-K, and much more.”