Letterman Apologizes To Palin (Again), This Time She Accepts 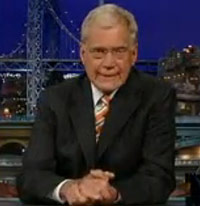 Last night, David Letterman apologized to Alaska Governor Sarah Palin for his questionable jokes about one of her daughters. He had initially apologized last week, but Palin still considered the remarks—which suggested that A-Rod might impregnate her daughter and that they should keep Eliot Spitzer away during the Palins' trip to NY—offensive and demanded that he "apologize to young women across the country [for contributing to a culture] that says it’s OK to talk about statutory rape...It's not cool; it's not funny."

What made Letterman's jokes more uncomfortable was the fact that the daughter on the trip was not 18-year-old Bristol, who he assumed was present, but 14-year-old Willow, giving First Dude Todd Palin a chance to say, "Any 'jokes' about raping my 14-year-old are despicable (yikes) and some people an opportunity to start a Fire David Letterman group. So, the talk show host took some time to say he was sorry once again:

Well, my responsibility - I take full blame for that. I told a bad joke. I told a joke that was beyond flawed, and my intent is completely meaningless compared to the perception. And since it was a joke I told, I feel that I need to do the right thing here and apologize for having told that joke. It’s not your fault that it was misunderstood, it’s my fault. That it was misunderstood. [Audience applause] Thank you. So I would like to apologize, especially to the two daughters involved, Bristol and Willow, and also to the Governor and her family and everybody else who was outraged by the joke. I’m sorry about it and I’ll try to do better in the future. Thank you very much.

Here's the full transcript—Letterman did crack a joke about how Palin did go to the Yankees game with Rudy Giuliani—and how he should have made his jokes about Rudy. Agreed!

This morning, Palin issued a statement saying, "Of course it's accepted on behalf of young women, like my daughters, who hope men who 'joke' about public displays of sexual exploitation of girls will soon evolve. Letterman certainly has the right to 'joke' about whatever he wants to, and thankfully we have the right to express our reaction. This is all thanks to our U.S. Military women and men putting their lives on the line for us to secure America's Right to Free Speech - in this case, may that right be used to promote equality and respect."

While CBS said that advertisers hadn't pulled out, the Decoder reports that Embassy Suites "sent word to Ms. Palin’s supporters that it had ceased advertising on CBS’s Web site and did not want to be associated in any way with Mr. Letterman’s comments."