Through the darkness I heard the labored breathing of a sweaty Bobby Cannavale, and in that opening scene of Vinyl, where we first meet Richie Finestra of American Century Records, I knew it wouldn't be for me. I had been guardedly optimistic about a trip back to the '70s with Martin Scorsese, specifically a real and dark snapshot of the music industry during that decade as its players wheeled and dealed about New York. But it's doing to 1970s NYC what Gangs of New York did to 1860s NYC — the pilot (which runs 2 hours long) delivered a costumed glimpse into a vibrant era that loses its flavor through Hollywood over-scripting.

I wanted Cameron Crowe's Plaza and Max’s Kansas City of Almost Famous, not a focus on thugs and mafia-esque beatings, with Robert Plant simply one of the out-of-focus guys in the background.

But let's look at how they portrayed New York City during one of its most trying decades—spoilers ahead. 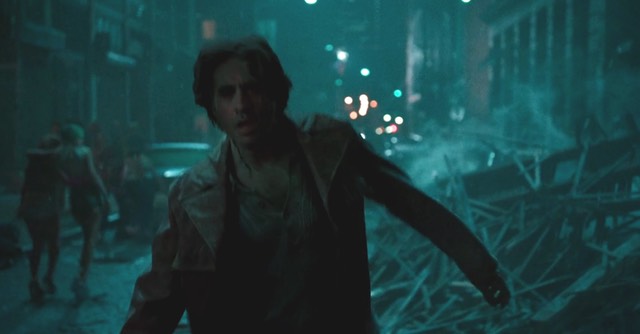 In that opening scene, Finestra stumbles in to the Mercer Arts Center where the New York Dolls are charging up the room with youthful energy and joyful chaos. But then the building collapses—cracks spread along the sides of the walls, the floors come crashing down, and a pile of rubble is left over. Did this happen? Sort of.

The building didn't collapse, so much as it caved in. And the New York Dolls weren't performing when it happened—during an episode extras feature on HBO, one of the crew explains that another band was rehearsing when it went down. The collapse occurred in August 1973, and the NY Times reported that most of the Center was not damaged. The scene photographed outside of 673 Broadway following the cave-in, however, was quite similar to the portrayal of the damage in Vinyl. You can see a photo at the NY Times, where they reported that the incident injured "at least a dozen persons, halting subways and bringing scores of policemen and firemen to the scene to begin digging in the debris."

Today the property belongs to NYU.

More on the New York Dolls can be found here. 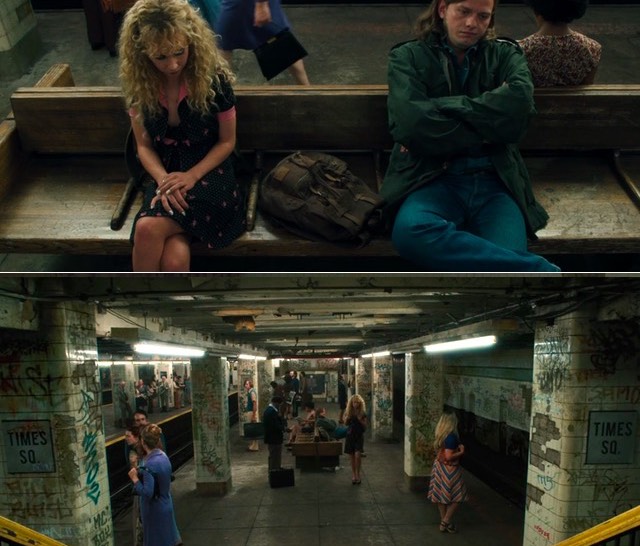 Graffiti was certainly all over the subway system in the 1970s, as the NYPD Vandal Squad wasn't formed until 1980. So in that respect, the station looks fairly legit, if a little bit over-the-top. But that doesn't mean we can't find something wrong with this picture: were there wooden benches in the system back in 1973? Probably not. The MTA pins them closer to an early 1980s addition.

More photos of the NYC subway system in the 1970s can be found here. 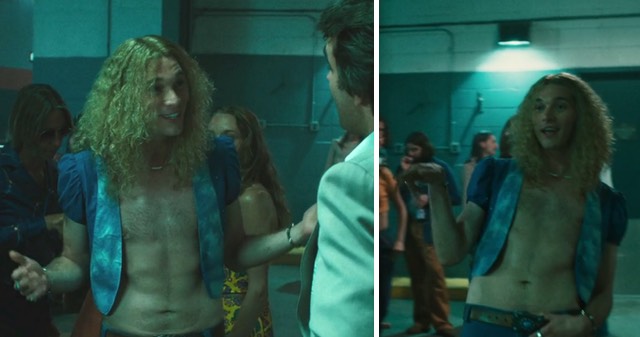 Oh dear. Listen, I don't know 1970s Robert Plant personally, but I am pretty sure this is not him. It's certainly his jacket, but the person filling that jacket is a goofy bizarro Plant, with an air of Arthur Fonzarelli to him. Aaaaay! Anyway, in the storyline Led Zeppelin is about to play one of the 1973 shows at MSG, which would later become The Song Remains The Same live film. As they hit the stage Plant starts to belt out "Somethin' Else" (which didn't make it to the video).

Prior to this scene we see Finestra and his crew on a private plane that, while smaller than Led Zeppelin's Starship jet, was reminiscent of that party-in-the-air vibe. The band took that jet to New York City for the shows.

In the background of the Finestra-Plant scene you can also see manager Peter Grant flipping out. Though this likely isn't why, during this trip (right before their final performance), the band had $180,000 stolen from them at the Drake Hotel. No one was ever arrested, even after Grant went on television to discuss the matter.

More on The Song Remains the Same concerts can be found here. 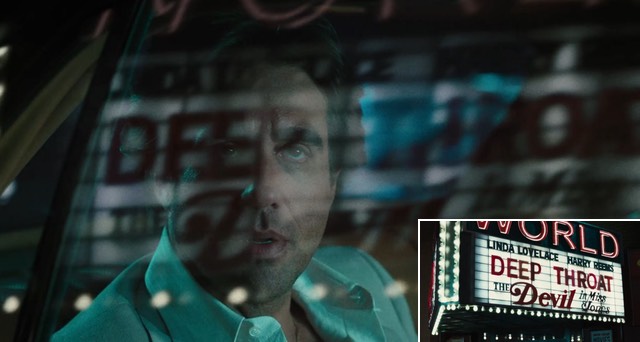 Finestra glides through Times Square briefly, taking it all in from the back seat of his chauffeured car. Though for someone who holds court at the nearby Brill Building, and has seen the city after dark, he seems almost surprised by its X-rated marquees and flashy squalor.

More photos of Times Square in the 1970s can be found here. 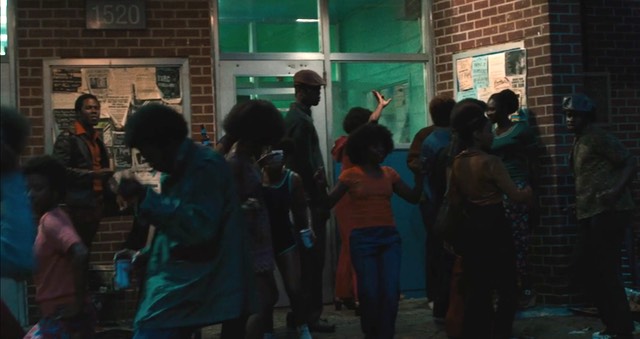 Just as the show jumps from time and place with a jerky rapidity, it also squeezes in as much of the vast music landscape as possible in the first episode, to a fault. We encounter hip-hop on the same drive that brings Finestra through Times Square—a drive that also includes trying to force in some news of the world over a radio broadcast—and it begins to feel like we're on Walt Disney's Carousel of Progress ride. Out the window we see the city passing by, and suddenly the numbers "1520" appear as a record is spun and scratched—this is the Birthplace of Hip-Hop, or 1520 Sedgwick Avenue in the Bronx.

As legend has it, on August 11th, 1973, "DJ Kool Herc's sister Cindy Campbell decided to throw a back to school party in her building's small rec room at 1520 Sedgwick Ave. Kool Herc introduced extended break beats, which mesmerized the jam packed crowd. Soon, he had to take the party outside and down the street to Cedar Park, drawing thousands throughout the night to see the birth of the art form."

More on 1520 Sedgwick Avenue can be found here. 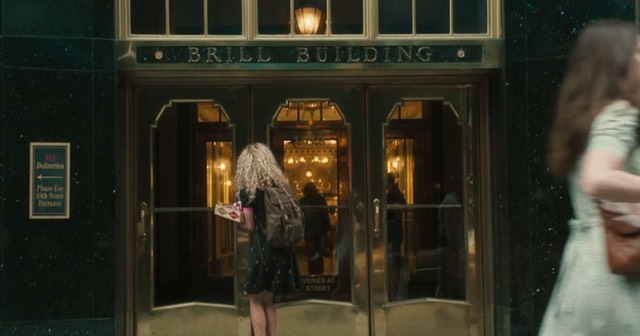 The Landmarks Preservation Commission deemed the beautiful art deco Brill Building, located at 1619 Broadway, worthy of landmark designation in 2010. During the pilot it seems to be of a Too Old era, with one record company employee suggesting they move to a new, cooler office building.

The first three music companies to move into the circa-1930s building were Southern Music, Mills Music and Famous-Music, and by 1962 more. Steely Dan's cofounders Walter Becker and Donald Fagen got their start writing songs there in 1969-1970.

More on the Brill Building can be found here.

Richard Hell reviewed the show for Stereogum, and he didn't like it, writing, "The show is a typical TV soap opera. By modern standards it’s mediocre even at that." Here's some more:

"I don’t want to be too hard on Vinyl. I thought it was boring, I thought it was innocuous trash, but I may not be objective. A major selling point of the show is its setting in the 1970s New York music scene, wherein were born punk and hip-hop and much of disco. Fascination with down and dirty, crazed, but semi-glamorous, ’70s New York has been durable. I was a part of the punk emergence back then, and the main character in one of the many subplots of the series is partly based on me. That had a lot to do with my getting invited to write this review, and agreeing to. But the show isn’t really about music, it’s about business, and business as understood by Martin Scorsese. I respect and admire Scorsese, but I get tired of his relentless framing of life as nothing but competition among men for power."

And Alison Martino offered up a real glimpse into the record industry back then, noting that Vinyl fell short of capturing that:

What real #record #executives looked like during the #1970s. #Vinyl didn't capture it. This photo was taken at my parents house in #1974. My father had all the #CapitolRecords staff over for a business party. Notice how #authentic they all look. I love how the guys in wide color #polyester #suits blended in with the hippie fads of the times. In VINLY it looks like they purchased Austin Powers clothes at a Halloween store on Hollywood Blvd. How disappointed I am in the series so far. Must every story like this be framed in a cautionary tale? No feeling of the celebration and joy of being alive that finding exciting music you loved brought to one's life. It's unfortunate they made it seem all so sordid and unpleasant. And what was with all the Donny Osmond and ABBA hate. Jeesh! #RecordLabel @capitolrecords #TheRealDeal #CapitolRecordsExecutives #1970sParty #

Anyway, it's not supposed to be a frame-by-frame adaptation... but we hope, any inaccuracies aside, that the show hits its stride soon, and pulls us in.

#HBO
#martin scorsese
#nyc as seen on tv
#vinyl
#original
Do you know the scoop? Comment below or Send us a Tip