Let's Help Find Myrtle The Dog, Who Has Been Lost For One Week

This is Myrtle, have you seen her? 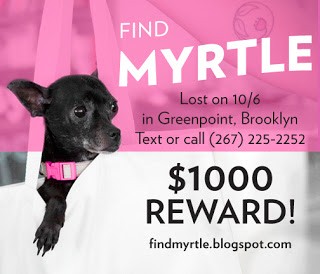 You have probably heard by now: Greenpoint resident Danielle Maveal has lost her dog Myrtle. Well, Myrtle, you've probably logged enough time and adventures out there for a first novel: it's time to come home!

The adult Chihuahua was in the care of a dogsitter while Maveal was away for a wedding last weekend, and during a nighttime walk Myrtle got spooked and took off on Nassau Avenue. Maveal came home when she heard of the news, and took to the streets and to social media in an effort to spread the word of her lost pup. She got Neko Case, Ted Leo, John Hodgman, Horatio Sanz and others to help spread the word on Twitter, and promptly set up a "Find Myrtle" website, announcing a $1,000 reward.

Over the past week her search has spread out, and the 33-year-old even had a pet psychic come in to help. Yesterday she got another lead, explaining: "I received a call this morning from a woman who said kids in her building found a little black chihuahua and were going to turn it in to a vet or shelter. She then saw a flyer for Myrtle and called me to let me know. This woman lives all the way out in Astoria! She said the kids went to school and she had no more information. I jetted over to her building to look for Myrtle and to flyer there while I waited for the kids to come home." She's been back in Astoria all day today, updating on Facebook.

If you think you see Myrtle: pick her up, give her a hug, and contact Maveal immediately.