Let's Go Back To Waiting On Line For Concert Tickets

In the 1980s, when I desperately wanted concert tickets, I would call whatever telephone number I was instructed to call by a television commercial that was alerting me to the tickets going on sale soon. I would dial over and over again until I didn't get a busy signal. And then I would be placed on hold. I usually lucked out, particularly after the "redial" button was invented. The other options were waiting on line at a box office or record store, and mail order. Thanks to a little persistence and patience, I'm pretty sure I got tickets, for face value, every time I wanted them.

Earlier this summer I signed up to become a Ticketmaster Verified Fan online, which was the first step in securing tickets to Bruce Springsteen's intimate Broadway shows this fall. Last night I was informed via email that I was not chosen as one of the fans to be allowed access to the ticketing system. I don't know what robot decided which fans would be allowed the chance to purchase tickets, but I will find that robot. One day. In the meantime, an idea: bring back humans.

Let's look back to 1985 for a moment, when Springsteen tickets went on sale for his "Born in the U.S.A." tour. At the time, the NY Times reported that "customers deluged the lines at Chargit, the telephone ticketing service, sharply hampering phone service from New Jersey to Virginia." Another ticketing agent, Teletron, reportedly received "79,000 orders in 15 1/2 hours." Meanwhile, in NYC, "Ticketron used an elaborate system of numbered wristband that allowed people to leave the lines and resume their places later." Police Officer George Conroy even told the paper that "crowds had been very orderly."

Elsewhere in the rush to buy '85 Springsteen tickets

If the ticketing industry really wanted to reduce scalping, they could go back to the line and wristband system. Tickets go on sale, fans line up, show their ID, are allowed two tickets, and are on their way. It's a nice little communal experience (just look at all those happy people in the photos above), and true fans have a better shot of getting face-value tickets this way. The way the system is rigged these days, if I, a true fan, wanted to purchase a ticket to see Springsteen, my only hope at this point is Stubhub, where tickets are currently around $10,000 a piece.

Sure, scalping would still happen if we went back to a line system—look here, in 1984 the NY Times reported that "a variety of scalpers, capitalizing on the popularity of the singer Michael Jackson and his brothers, are charging $100 or more for a ticket to the Jacksons' Victory Tour... tickets with a face value of $28 are being resold throughout the New York area for $150, $200." But my guess is there were a few less scalpers in those days... and anyway, a $100 markup ain't that bad, maybe when scalpers aren't hiding behind the anonymity of the Internet they aren't such dicks? We may never know. 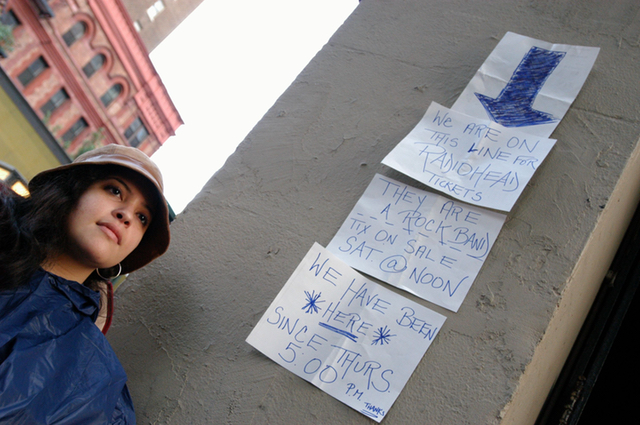 In conclusion, having done zero research on the complexities of getting tickets into the hands of fans, I offer this guidance: look to the past, and not the future. If you want to reduce scalpers, Big Ticket Industry, just bring back a little face time, a little ID checking, a few humans. And then more people can be like John P. Rogers here, who waited on that 1985 Springsteen ticket line outside of Grand Central Terminal, and happily declared: "It's the event of the summer."

And once you finally get into the concert, could you please shut up during the performance?