Let's Bring Back These Anti-Spitting Posters

Speaking of etiquette... did you know that spitting is still prohibited in New York City, with the law stating that "no person shall spit upon a sidewalk of a street or place, or on a floor, wall or stairway of any public or private building or premises used in common by the public, or in or on any public transportation facility." (Spitting in parks is also unlawful.) But everyone spits, and it's gross, so let's bring back these scaremongering signs, eh?

Ephemeral NY looks back on "the nasty habit," which was addressed back in the 1800s with signs that warned of spitting spreading "lethal diseases, especially tuberculosis, a leading cause of death in crowded, dank neighborhoods." NYC was the first city to outlaw it, with signs going up in public transportation hubs and "other spitting hot spots." A $500 fine was tagged on to the law, and in 1910 the NY Times wrote, "of the 2,513 arrested, there were 2,099 convicted, one of every seven escaping. The total fines were $1,936.80, an average of less than $1.”

In 1901, one man wrote to the Editor of The NY Times, saying, "The ripple of decent sentiment against spitting in public conveyances is bringing to the surface many facts of interest, among which an important case is that of spitting car conductors. Permit me to add another instance of official disregard for law by spitting policemen." Read the rest below... and we're guessing even some of New York's Finest still spit from time to time. In 1996, and officer told the Times that the NYPD's Transit Bureau "has never issued a $25 summons for spitting. And no judge in recent memory has imposed the maximum 10-day jail sentence." 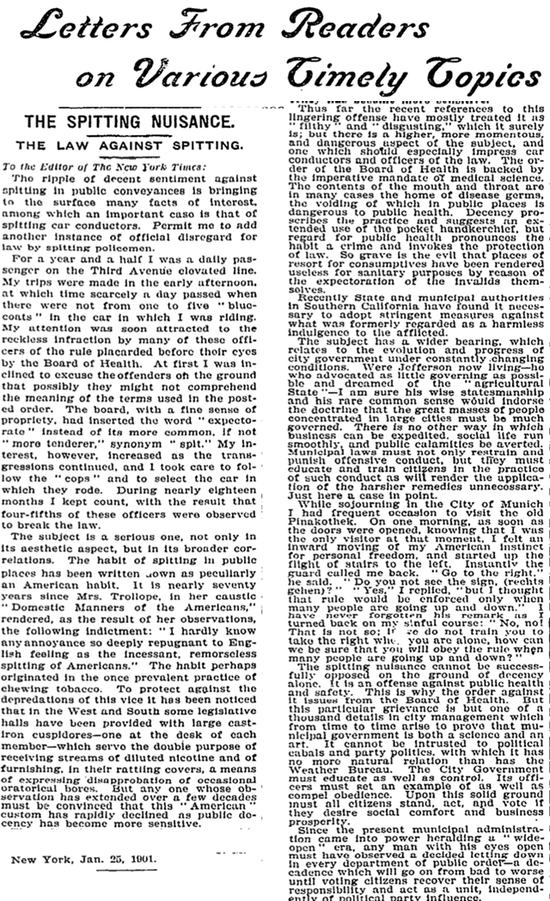 #etiquette
#gallery
#history
#laws
#letter
#poster
#sign
#spitting
Do you know the scoop? Comment below or Send us a Tip