The Lowline, the plan to put a park in an old underground trolley terminal below Delancey Street through the wonder of fiber optics (and noblesse oblige) is chugging right along, with celebrities putting their money and support behind the project that takes obvious inspiration from its uptown cousin. While the High Line had David Bowie and Ed Norton (and billionaires) to help shepherd it into existence, The Lowline has Lena Dunham and Spike Jonze, who co-hosted a gala event last night to raise funds for the park.

The gala was held in an underground event space just next to the High Line on the West Side, and guests walked through a blacklight-lit hallway filled with dead leaves, some coated with fluorescent paint, while ornamental trees glowed an eerie pink and green along the side. 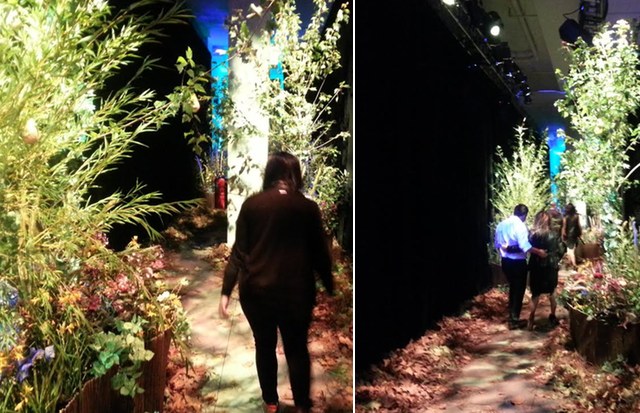 Many of the celebrities supporting the project had left or made themselves unavailable for comment by the time we arrived. Thankfully, the bar was open, and young fashionable people milled around the event space as the band Bleachers, led by Fun guitarist (and Dunham paramour) Jack Antonoff, played some power pop in support of the Lowline.

“Thank you all so much for supporting such an important park,” Anotonoff shouted between songs.

“We should do it because the space is available and it’s cool,” Sebastian, a 25-year-old attendee of the party told me of the Lowline. “It’s also weird.”

“Weird is cool,” said Doreen, 24, who attended the party with Sebastian. “Being weirded out is really cool.”

After Bleachers played, James Murphy DJ’d for the now-besotted crowd, who were treated to a very good short set. The former LCD Soundsystem frontman spun Bowie’s “Fame,” a possible allusion to Bowie’s involvement in the High Line, or the description of what the Lowline is utilizing to fund itself, or possibly just a good song that fit the moment. Murphy, always affable and completely aware, listened patiently and with good humor as attendees made requests for songs. He finished with a version of Paul Simon’s “Diamonds on the Soles of Her Shoes,” possibly alluding to the financial standing of his audience, or maybe just an excellent song about the West Side of Manhattan.

At exactly twelve, Murphy threw up his hands. The party was over.