Rare is the email that improves with age. But this missive sent from Lena Dunham in 2007 stands up pretty well, especially considering that she was all of 21, a time when most of my emails contained attachments for late papers and lacked the slightest whiff of self-awareness.

Dunham's email is part of an ongoing art exhibit put together by Miranda July titled We Think Alone. Every week, emails sent by 10 prominent artists/actors/thinkers/doers/etc. are arranged around a theme, and then sent out to a list that anyone can join. All of the emails were written prior to the project.

The emails humanize these Important People (surprise: most emails are not Important!) and say Interesting Things about the mistaken ephemerality and intimacy of this medium and oh yeah, we get to read private emails.

This week's theme: "An email that includes a picture of yourself." Dunham's email stands out from the rest in that the picture is not the point of the transmission, but an afterthought appended to a brief, if detailed snapshot of her day.

It's got everything a recipient might want: a playful, once-off moniker; sex; plenty of superficial questions deployed rhetorically so as to genuinely signal interest ("how was your birthday daytime? "is that the kind of stuff i shouldn't say?") and bigger questions that demand a reply ("was it a heavy birthday or a light one?"). It wraps up with a maxim about compliments that strikes me as true, and of course, the picture. Here's the email:

how was your birthday daytime? did you ride your bike to midway mall to buy shorts? (that was such a cute plan.) maybe you ate some of that sorbet that really gets you going? cake? i know you're not that fond of cake-- didn't you once tell me you do something weird instead of having birthday cake, like sticking a candle in a frozen kiwi or something? i think i made that up...

both the dudes on my crew have stomach viruses, so they were close to falling over all day. then my friend Jen, who is this audacious pervy former model-turned-actress-turned nursing student, announced "this morning my boyfriend's penis smelled really bad" and both guys looked like they were about to vomit so much. then she said "i mean, not his penis, his foreskin... i mean... is that the kind of stuff i shouldnt say?"

i am going to ride my bike to see teddy's band play now. let me know how you're feeling when you're in the mood. i hope it was all so nice, that you were well taken care of. you were in my thoughts a lot today (just general contemplations about independance, unknown vistas, all the swell stuff that could happen for you, and soon...) was it a heavy birthday or a light one? and how would you rate your life thus far on a scale of 1 to 11?

p.s. my sister came home crying. we talked about it and she was sad because she feels like she gives everyone a lot of compliments and they never compliment her back, and she's frustrated. it highlighted for me what is dangerous about compliments. i don't think a desire for affection/appreciation is why i say nice things, but it birthed another good criteria: grace and i think  a person should make sure that their compliment isn't a subtle request for a return compliment, but rather something given because you feel it and you just cant hold it back.

p.p.s. i used my macbook to take a photo of me in my costume which is pretty offensive and i thought you might appreciate it, being my lover and all. it's like what 50 year olds do to spice up their sex lives.

In the spirit of Fairness, here's an email I sent that includes a photo of myself. I even misused a word.

I've been informed by the good people at Castleberry's Food Co that Bost Distributing is now the proud distributor of Mrs. Fearnow's Brunswick stew. This is good news, as I've been eating Mrs. Fearnow's Brunswick Stew for 10 of my 23 years, and I wouldn't want it to languish on the factory floor for wont of a distributor. I recently purchased two cans of Mrs. Fearnow's at a neighborhood Harris Teeter (I live in Washington, DC) and to my deep dismay, found a slimy, mold-like substance on the bottom and sides of both cans. I've attached a photo of one of the cans. Perhaps Teeter needs to be warned of this bad batch? I'll be happy to provide Bar Code #'s, etc. 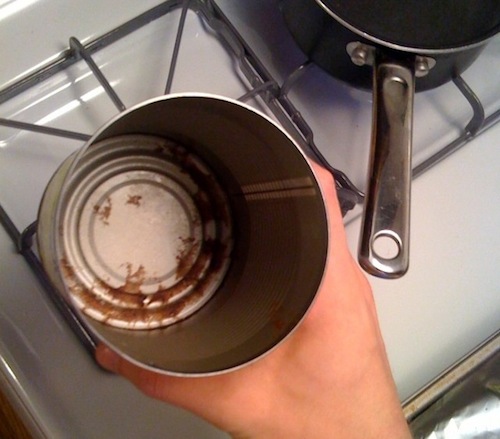 I cared a lot about canned stew back then. According to Ms. S, the muck is "sulfite staining which occurs when the chicken meat touches the can during the cooking process." It's safe to eat.

We Think Alone runs through November 11. Sign up for the emails here.