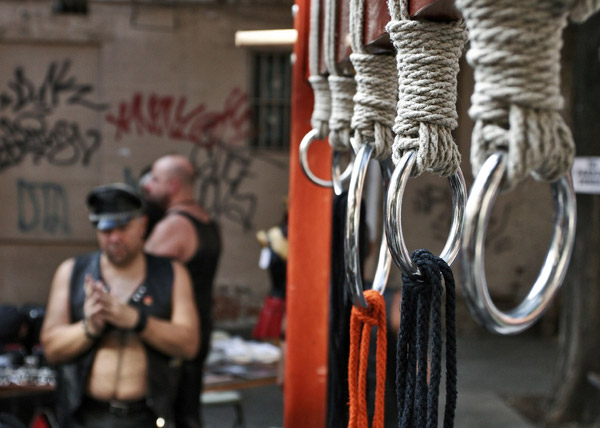 Last week a group of parents in the West Village were up in arms about the S&M street festival hitting a street too close to home. Yesterday the fest, which was part of New York Leather Weekend, hit Weehawken Street -- or shall we say whipped? Those in attendance perused a plethora of whips, chains, blindfolds and other S&M garb.

Those not in attendance were undoubtedly plotting a way to make sure their children are never exposed to anything more than a G-rated street fair again (many suggest moving to New Jersey). The organizer of the event told amNewYork:

"We are still here, we still belong here," said Richard Ives, a festivalgoer. "Other communities have the church group or the country club. This is like that for people who don't feel comfortable in those kinds of settings. The dynamic in the city has changed so much," he said "We are trying honor the history and the heritage of the leather movement. We are not going to hurt anybody. Unless they want to be hurt, of course."

Those in the 'hood that resist this type of celebration of diversity have been calling for the removal of appointed Community Board 2 Chairperson Brad Hoylman and CB2 District Manager Bob Gormley. We received an email from Brad Hoylman with a copy of what he had been sending to those protesting, and we'd have to agree that this type of street fair is preferable to those "generic, cookie-cutter" ones.

The Colbert Report had a team on the scene, a segment that should be airing tonight -- you're not going to get that kind of coverage selling funnel cakes!