For years the Metropolitan Museum of Art has made us feel as if we had to stand in line with tourists, their hands furiously rummaging through neoprene fanny packs scrounging for the $100 to buy their family enough time before getting on a double decker bus or going to the Tenement Museum or doing something that actually costs money. Walk past the sign that reads "recommended" in tiny type without paying and reckon with the stink eye of the security guard, who glares at you as if to say, "Fancy Sketchers you're wearing—surely you can afford another $25." Well (perhaps) NO MORE: two Met members have sued the museum for fleecing innocent marks tourists and patrons by tricking them into paying.

The two plaintiffs, Theodore Grunewald and Patricia Nicholson, point to an 1893 law that requires the taxpayer-funded museum to be open free to the public for five days and at least two nights per week. “The Museum was designed to be open to everyone, without regard to their financial circumstances—a public library of art and culture to enrich the lives of the citizenry, Nicholson says in a release. "But instead, the Museum has been converted into an elite tourist attraction to be enjoyed only by those who can afford to pay expensive and illegal admission fees.”

Grunewald, a preservationist and architect, commissioned a study with Nicholson that showed 85% of nonmembers believed that they had to pay to get in. 65% of members said they joined in part so that they could get in without paying a fee. (Presumably at least 54% were "excited to see the dinosaur skeletons.") Harold Holzer, a Met spokesman, told the Post he thinks the lawsuit is "frivolous."

“The suggestion we’ve been defrauding the public is ludicrous and outrageous,” he said. “The suggested admission is $25, but it’s not mandatory,” he said, adding that the museum’s surveys have shown its patrons understand that. “It’s on the signage.”

For the record, here is The Met's crystal clear signage on the internet: 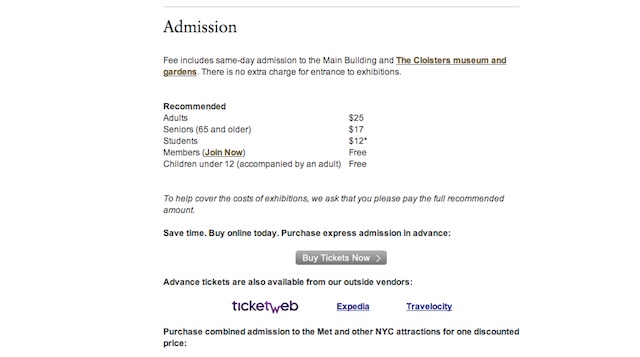 #art
#metropolitan museum of art
#scams
#the met
#tourists
Do you know the scoop? Comment below or Send us a Tip