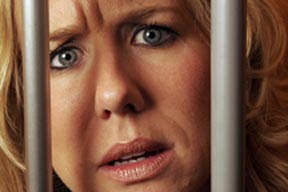 Lauren Weedman's memoir, A Woman Trapped in a Woman's Body

, isn't the standard memoir. It's not about getting addicted to drugs and going to rehab or about living on the streets and selling her body. It's about what happens when you start doing stand up for ten minutes every night at the dinner table when you're eight because you don't want your adopted parents to send you back to the adoption agency because you didn't provide the "hours of entertainment" that they expected and never stopping, not when you're meeting Jon Stewart on your first day at the Daily Show, not when you're going through a divorce, and not when you meet the friends and family of your live in boyfriend for the first time after the death of his wife. For this reason, Weedman's memoir is non-stop funny and provides "hours of entertainment". And she'll be reading at McNally Robinson on October 10th and the UCB Theater on October 11th.

One thing that struck me as very peculiar in your book was the reaction of your co-workers at the hotel you worked at in Amsterdam about the idea of the customer always being right. They were so outraged! Why?
The Dutch are not customer service people. They don't believe in the fake American thing, and that was one of the things when I was there that they were super irritated by, was that Americans are fake, and that we say we're happy when we're not. And they would even go down on the whole thing of like, "I hate this thing where you ask somebody, 'How are you?' and they say, 'I'm good! How are you?' Why does everybody lie?" They really don't like that. We are the most cheerful of the fake people. There's just certain fakeness with customer service that the customer is always right, that they were absolutely against. They're all based on a certain core of truths, and that is the core truth of that one. That one thing is completely true. This woman says in there-- you know how you're supposed to smile when you pass people-- she says, "Why would I smile if I'm not happy? Why would I lie?" It was just hilarious.

When you would come back to America to visit, were you all Holden Caulfield-like, always calling people on their phoniness?
I definitely would in Indiana. I still do that in Indiana. But now it's kind of comforting to me. "Give me some fake people." An Indiana fake, not L.A. fake. It's funny, in Amsterdam I was considered way too cheerful, and I laughed too loud, and then I came back to Indiana and I was considered too negative and too intense. But definitely, calling people out, everything. I'm sure I was a nightmare. "Oh, Diet Coke. How could people do that?" I was anti-America, man.

Maybe it's because sex is so accepted in Amsterdam and even a profitable industry that some of the residents seemed to have gotten pornography and reality confused. They'd jump out at you and masturbate or just share pornography with you at random. Was that a big thing that happened?
Yes, it was traumatizing. And I wonder if I go back now-- I had just never witnessed that kind of darkness. It was too super dark and super messed up. It's like the dark parts of humanity-- well, not that sexuality is, but you know what I mean, sexuality gone wrong-- and it definitely freaked me out. And you're right, it seemed like it's so integrated in their society. I just saw things I've never seen. I saw a lot of other things, obviously, and they were amazing. I just don't write about that. I'm not like, "Oh, the tulips," I'm not a poet. I wrote about the things that traumatize me, like seeing junkies with needles hanging out of their arms. And the guy jumping out of the bushes-- that fucked me up for days. But now I don't think that would bother me as much, obviously.

Did that happen more than once, with people jumping out at you?
Like seventeen times, I swear to God. Like every bush, some masturbating man jumps out at you. What a country! No, it happened twice. The red light district is just something you deal with, and eventually I just avoided it. And I'm not anti-the industry. I like it's legalized. Just like the internet. I know it's there, I'm not that interested in seeing images that are going to fuck me up the rest of the days. The guy jumping out of the bushes, and another one was I saw a guy walking down the street-- and I'd been there two years at this point, so it freaked me out but I recovered quicker. Because I knew that that's not going to hurt me, this country's not going to destroy me. I think that when I first got there, I felt really scared and unsafe, like something bad was going to happen. It was my first time out of the country for so long. By then, I spoke the language, and you know. But this guy, it was raining out, and he was walking down the sidewalk in the rain, everybody else has umbrellas. He doesn't have an umbrella on, and he looks totally normal with jeans and a t-shirt on, he's soaking wet, and he's got his dick hanging out of his pants with a condom on it. As if that was his little umbrella. And I didn't have my glasses on, so I was staring, I was like, "What is that? Does he have a raccoon tail tied to his belt? What is that?" And then as he got closer, I was like, "Oh, for the love of God!" And that didn't make me cry-- the other one really upset me-- this one, I couldn't wait to get into the hotel where I was working to tell everybody what I'd seen. Then I realized it was hilarious, and I started laughing.

What was their reaction?
Also just laughing. Everyone in Amsterdam has stories. The city's way too sexualized. Everyone's seen drugs and sex, and you know. My memory is, everybody was just laughing. And laughing at my reaction, because I really was staring, squinting my eyes trying to really make out what it was, as if I was really checking it out. It was not good.

I imagine that none of your New York moments can compare to that. But what is your strangest, "Only in New York" moment?
I heard live jazz music coming out of a church on a Sunday morning by Washington Square Park. I stuck my head in--and started to wander in toward the music--and couldn't see very well because I'd just come in from the sunlight into total darkness and all of a sudden this guy walks up close to my face and screams," What are you looking at you ugly cunt!" And I'd taken only 3 steps into the church sanctuary area. He was a mentally ill dude, or else one of the choir boys, who had also just wandered in and saw me and got fixated on me and I turned and left the church because I couldn't really see well to find a pew to sit down on. I was so shook up I just turned and left, seeing him screaming at me as a sign, perhaps, that I should leave, but he followed me out of the church and down the street screaming "What are you looking at you ugly bitch?" Sometimes it was bitch, sometimes cunt. So, it was that and a group of construction workers singing that "Lion Sleeps Tonight' song on a subway after work to entertain everybody. That's a great memory.

Given the opportunity, how would you change New York?
No shitting on the sidewalk.

Which New Yorker do you most admire and why?
I admire all of my friends who are artists and struggle to survive financially in that city-- I don't know if I could think of just one person. The first image I had in my head was Susan Sarandon---but that may be because i used to see her and think---'oh thank god, she still lives here.."

What would be the perfect day of recreation in the city for you?
Walking from 76th Street to the Village and then back again.