In the interest of keeping with our "no spoiler" recaps of Mad Men (at least as far as major plot points are concerned) let's look at some of the historical and New York City-based references in last night's episode—the last before next week's big finale.

"THE MUSEUM"
The American Museum Of Natural History was featured as the backdrop for Glen and Sally's visit (where it's referred to simply as "the museum" by the kids). During his somewhat impromptu visit to Manhattan, Sally asks Glen what he wants to do—"Are you kidding? The museum's right across the park." Sally tells him, "We don't go across the park, there's bums on the other side." 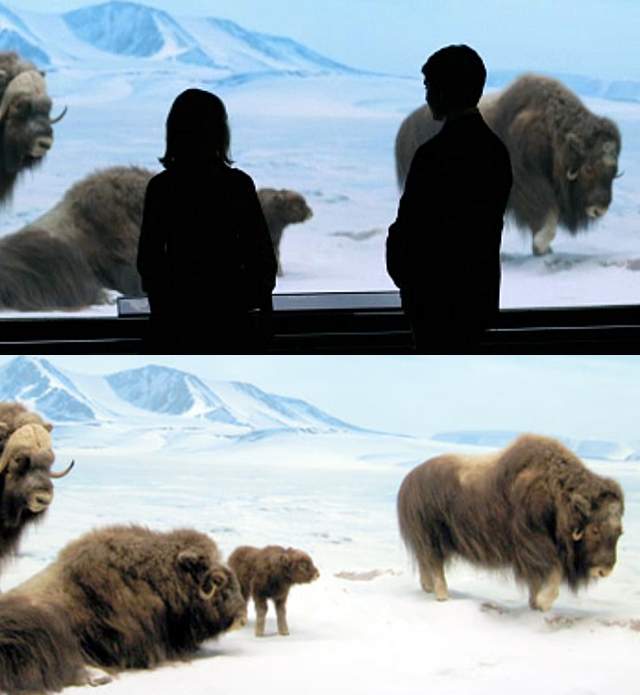 The Musk Ox at the Natural History Museum in LA, and on Mad Men

First of all, the dioramas were not the ones you will see in the Manhattan museum... upon closer inspection you'll notice they're from the Natural History Museum in LA, where the episode was filmed. And while Glen notes that Teddy Roosevelt killed the animals in the dioramas, that is only partially true.

Collecting for the diorama began in August 1937, when James L. Clark, then Director of Arts, Preparation, and Installation at the Museum, led an expedition through Wyoming, Montana, and North Dakota to gather specimens and make studies of possible background landscapes. Most of the bison used in the completed diorama were taken from the National Bison Range in western Montana during a later expedition. The National Bison Range wildlife refuge was established in 1908 during the presidency of Theodore Roosevelt, and can trace its stock back to a small group of bison calves rescued by the Pend d'Oreille Indian Walking Coyote.

Here's a look back at the dioramas being unpacked and worked on in the 1930s. 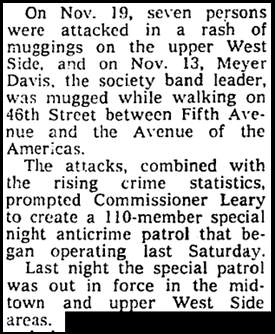 Sally mentions that she doesn't go to the Upper West Side because of "the bums," and it's true that the era wasn't the best for the neighborhood. In 1966 Joseph P. Lyford published a book called The Airtight Cage, which focused on the deterioration of the Upper West Side, between Harlem and 86th Street.

According to a 1966 study, out of 150,000 residents, 105,000 were white (of whom 40,000 were Jews); 26,000 came from Spanish-speaking homes; and 18,000 were black. Lyford wrote: “Only in Honolulu is there a greater confusion of blood, ancestry, language, and culture in as small a space,” but noted that the divide was less racial, and more of a class divide. According to Commentary Magazine, in 1966 Lyford wrote, “a 'twenty-block site of a multimillion-dollar urban renewal program laying between Eighty-seventh and Ninety-seventh streets and bounded by Central Park on the west and Amsterdam Avenue on the East' was the fulcrum of a massive slum-clearance plan, involving the loss of 6,344 households."

The DOW CHEMICAL COMPANY & NAPALM
As we learned in recent episodes, the Don Draper we know Is Back... and he's trying to land some big accounts. Dow is one of those accounts, and during his effort to snag their business they ask, "Tell me about napalm." Roger says, "You mean that stuff the kids outside your building are screaming about?" In fact, the kids were screaming about it, most notably during huge sit-ins and protests nationwide in 1967, less than 6 months after this meeting took place.

WILD WILD WEST
In the episode, Bobby wants to watch this show, which aired on CBS from 1965 through 1969. The storyline focused on "two Secret Services agents, equipped with a wide array of gizmos, work for the government in the Old West."

And finally, the episode ends with this Lovin' Spoonful B-side, “Butchie’s Tune."

#amnh
#dioramas
#mad men
#mad men history
Do you know the scoop? Comment below or Send us a Tip