Landmarked Bowery Mansion On The Market

Even if the address "190 Bowery" doesn't ring a bell, you have most likely stopped and noticed the building at some point—it's the one with all that graffiti on the corner of Spring Street. Its exterior has remained somewhat of a tribute to the Bowery as it was decades ago. There's no boutique hotel inside, no Starbucks on the ground floor, and it has pretty much looked abandoned for years. And now for the first time in five decades, it appears to be on the market.

What started as a Germania Bank in the 1890s became home to photographer Jay Maisel in the 1960s—he also houses a gallery for his own works inside. Ever since he purchased it for $102,000 he has kept the entire 72-room place to himself and his family. At one point, however, Roy Lichtenstein rented out a studio space there.

Crain's reported yesterday that the six-story building popped up quietly on RFR Realty's website, but no one's talking—"RFR declined to comment and the photographer, Jay Maisel, did not respond to multiple requests for comment on the fate of the ornate six-story, granite and brick building."

Its fate seems to be similar to other Bowery buildings, as it's being marketed for commercial use. The listing reads: "The limestone building is 6 stories, with a basement and roof terrace. Floors measure approximately 6,260 SF each and have 11-foot ceiling heights. The ground and second floors have 18-foot ceiling heights and are ideal for retail use." 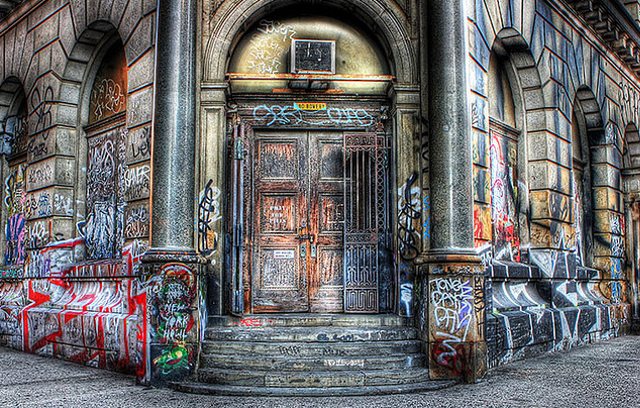 In 2008, New York magazine got a rare look inside the mysterious building, calling it "a graffiti-covered Gilded Age relic, with a beat-up wooden door that looks like it hasn’t been opened since La Guardia was mayor."

#190 bowery
#bowery
#jay maisel
#real estate
Do you know the scoop? Comment below or Send us a Tip