The New York City Landmarks Preservation Commission approved an expansion of the Frick Collection’s 1914 Gilded Age Mansion yesterday in a 6-to-1 vote (plus one abstention). Billed as “the first comprehensive upgrade to the Frick’s buildings” since it opened as a museum in 1935, the $160 million expansion will add, among other things, an auditorium, an education center, new ADA-accessible ramps and elevators, and 30 percent more gallery space, including part of the second floor that hadn’t before been open to the public.

The Frick is a mansion that's been turned into a museum; the industrialist Henry Clay Frick left it and his art collection to the public at his death in 1919. The collection has doubled since then and now has about 1,400 paintings, sculptures and other works, including pieces by such respected artists as Rembrandt, Goya, Vermeer and Renoir.

A spokeswoman said that the expansion will enhance critical functions, including conservation, education programs and basic visitor services, which are currently squeezed into spaces that were never designed to house a museum.

However, preservationists and some descendents of Frick have long prized the intimate character of the museum, and earlier in the week, they rallied at City Hall to ask the commission to delay the vote, so they could put forward a request to landmark the music room, designed by John Russell Pope (who also designed the Jefferson Memorial and the National Archives in Washington, D.C.).

When the commission instead voted in favor of the expansion, many preservationists were disappointed.

BREAKING #HistoricPreservationAlert:
This afternoon, the @FrickCollection got its free pass to do the unthinkable.😠

The group “Stop Irresponsible Frick Development” says on its website that the plan will destroy the “renowned music room” which has been a premier city venue for chamber music concerts; it will now become a special exhibitions gallery. The group also lamented the alterations to the Russell Page Garden, and said the expansion will “overwhelm the beautiful, iconic mansion at the center of the house museum.” 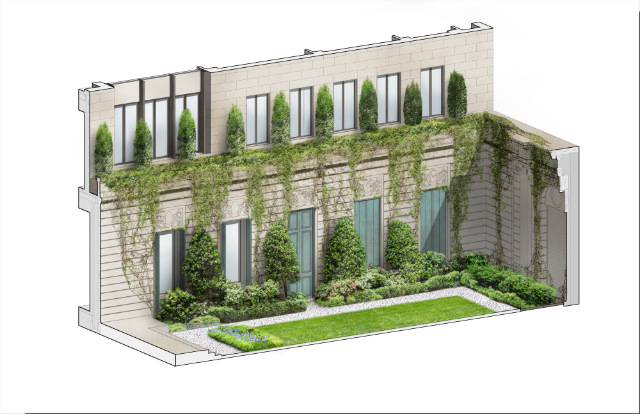 (Selldorf Architects) The Frick says the Russell Page Garden will be restored to its original design intent.

But others are happy with the result. Peg Breen, the president of the New York Landmarks Conservancy, told the NY Times it is “a very respectful addition.” She opposed an earlier proposal in 2015 that controversially attempted to replace the garden on East 70th Street with a six-story addition.

A spokeswoman for the Frick said in an email that the current plan for the garden will restore it to its original design intent.

The collection expects to break ground on the expansion in 2020 and complete construction by 2022. The plan must now move to the Board of Standards and Appeals for approval.

(Selldorf Architects/The Frick Collection) The music room will become a gallery that will allow the museum to present special exhibitions.

#frick collection
#museums
#preservation
#the frick
Do you know the scoop? Comment below or Send us a Tip